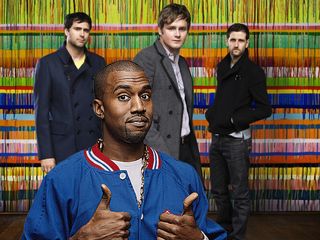 After conquering the dance world with latest album Perfect Symmetry, Keane are moving on to rap. We know this because drummer Richard Hughes spilled the beans back in October. They did, of course, require the services of a qualified rapper to pull it off in any sort of admirable way. Enter Kanye West…

"What a strange week in the life of Keane," pianist Tim Rice-Oxley blogged. "Exactly a week ago I was sitting on the Eurostar in a half-sleep, having just played the last gig of our European tour in Paris and then spent the entire night in the studio with Kanye West."

"He played us the whole of his new album, which sounded truly awesome - the bass was so fat that eventually the mixing desk blew up. Then Kanye did some work on one of our tracks."

Perhaps Kanye felt obliged to "do some work" after blowing-up the band's mixing desk. Whether the rapper does lay down the much needed vocal remains to be seen.