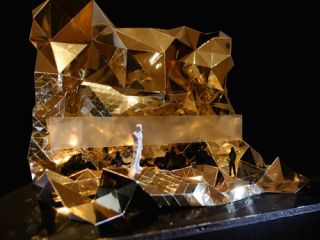 Just to prove that it's not just massive rock bands that can have elaborate stage sets, Kanye West has posted pictures on his blog of the structure he'll be straddling come the start of his European tour tomorrow.

Looking sort of like a gold version of Superman's ice palace, it appears to be a rugged glittery landscape that could cause you some damage if you fell over on it. Rather quaintly, the photos are of a mock-up - there even appear to be little figures of Kanye and his band.

The tour will be co-headlined by Lady GaGa.