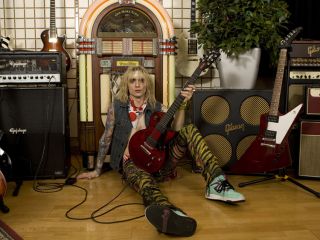 Last month, MusicRadar took a long, hard look at Gibson's new Dark Fire guitar. It was, and still is billed as a "marriage between Chameleon Tone Technology and Second-Generation Robot Guitar Technology." Yesterday, the mysterious axe was available to see in the flesh, modelled by ex-The Darkness and current Hot Leg frontman Justin Hawkins.

Hawkins took to the stage at the Gibson Guitar Studio in London to road-test the self-tuning wonder, delivering Hot Leg's new single I've Met Jesus in the process.

Gibson will ship limited quantities of the Dark Fire in the coming weeks, with more promised for early 2009 to meet the high demand. Understandably, the production process of such a technology-heavy instrument takes time.

Photos from the event are below…

Dark Fire's automatic tuning system tunes up in less than a second.