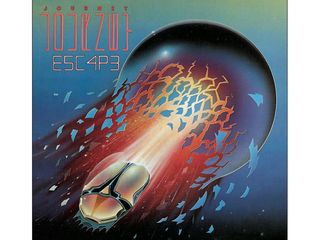 There's no 'escaping' this song's appeal

Journey's Don't Stop Believin' is a song you either love to hate or hate to love. But lots of people simply love, love, love it - the epic power ballad has become the biggest-selling digital catalog track ever.

According to Soundscan, it is the first catalog song to sell over 2 million downloads, achieving double-platinum status. (It is categorized as a 'catalog' track because it was released before MP3s were invented and available for sale online through venues like the iTunes store. It was placed in the iTunes Store catalog on April 28, 2003.)

Why is it so popular?

Good question, and like "What makes water wet?" it's somewhat unanswerable. However, the fact remains that, since it was first released on the 1981 Journey album Escape, Don't Stop Believin' resonated with fans.

Is it a cheesy song? Without a doubt, it reeks of Limburger. But its way-over-the-top message of hope - remember, it's called Don't Stop Believin', not Give Up Already - is an integral part of of its appeal, making it the ultimate unironic rock ballad.

Plus, Steve Perry sings his butt off. And that guitar solo by Neal Schon is pretty sweet too.

Hollywood loves it - that helps

Talk about a song that never fails to click in both movies and television. 2005 was a boffo year for Don't Stop Believin': it was featured in Monster, starring Charlize Theron; sailed its way onto iTunes' Top 10 Singles following same-week appearances on Fox's Family Guy and MTV's Laguna Beach; and if that weren't enough, became the unofficial theme song for the 2005 World Champion Chicago White Sox.

But the true zeitgeist moment for Don't Stop Believin' would occur in June 2007 after it served as the soundtrack to the climactic final set-piece of HBO's iconic mafia family television series, The Sopranos. Download sales of the song on iTunes rocketed an incredible 482 percent just three days after its initial airing.

No matter how you slice it, numbers like that aren't cheese. Hey, fuggedaboudit.