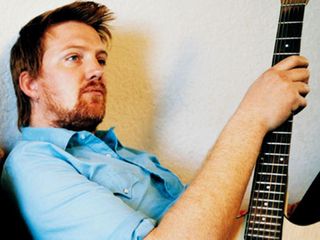 Josh Homme ain't too proud to not beg

When Queens Of The Stone Age frontman Josh Homme went off on a rowdy fan at the recent Norwegian Wood Festival in Oslo, it was the expletive-laden rant that was heard (and seen) round the world.

While nothing may be shocking anymore, especially in rock, Homme's vicious attack did ruffle feathers and raise questions. Was the singer-guitarist so messed up from a fever that he temporarily took leave of his senses, or was his tirade the sign of something more abhorrent?

Well, apparently, ol' Josh has been looking in the mirror, and late last week he issued an open letter. While it's not really an apology, it does offer something in the way of...heck, we don't know what it offers. You decide:

"Member of the Peanut Gallery:
Some journalists & citizens on the internet are wondering: Q? Am I a homophobe because I included a slang for gay in with other 'acceptable' curse words during a verbal lashing I gave a young concertgoer, after being hit by his shoe, during a show the other day? A= Nope. My gay family and friends, as well as myself, KNOW I am not a homophobe. For years now I've known gay is not a choice; one's skin color doesn't determine one's intelligence level; and red hair doesn't mean you're someone's stepchild. You see, it's not the words, it's their intent. I never said, nor suggested, that being gay is wrong, but apparently, based on your outrage to my flu-infused rant, you do! By that logic, I also told that young whipper snapper I'd have anal sex with him. How can I possibly reconcile these opposing viewpoints? I called him a p---- too. Does it mean I hate our one worlds' collective vagina? I never have been nor intend to be politically correct. That's your cross to bear.

To me, that PC world would suck more s--- than the porta-potty truck at Glastonbury . Homophobic? I'm in Queens of the Stone Age for crissake. You say, 'So. Your band name doesn't prove anything.' Maybe not. But it's a helluv a lot more definitive than the logic of some watchdog (sorry canine-American, canine-European, canine-African, canine-Australian and canine-Asian) moralist, keeping score from pure perfectionville? If your glass house is squeegeed that clean and you need to do something, do what the great philosopher Bill Hicks once suggested: forgive me. Or don't. I'm not asking for either, OK? I think you should let both of your cheeks go loose so the stick will drop out. Either way I expect that you'll soon find another injustice from your chair, then roll to your bullhorn and point it out to the rest of us. Because you're so above it all. Or If you'll allow me to translate a wish of mine into your PC lingo:

Will you please go have consensual, sex with yourself?

Pretty please with all natural, carbon offset sugar on top.

That certainly clears things up. Or not.