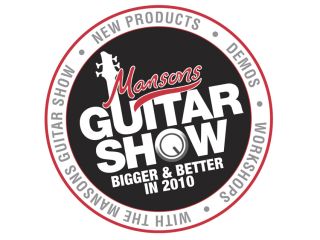 The 2010 Mansons Guitar Show is set to be both the biggest and best show yet with a record number of exhibitors confirmed including virtually every great guitar company on the planet. Manufacturers will be bringing their best model examples to exhibit at the prestigious weekend with several UK exclusive launches confirmed.

A great mixture of the small independent guitar companies are rubbing shoulders with large corporates, and the presence of guitar legends such as John Paul Jones from Led Zeppelin means Manson's Guitar Show is undoubtedly the UK's premier guitar lovers' event. A full list of exhibitors and artists is attached separately.

We are also proud to announce that Mansons Guitar Show is set to be one of the most unique in terms of prize-winning opportunities and has grown even greater this year. For 2010 Ampeg are giving away a bass rig signed by its roster of bass artists that includes members of The Rolling Stones, Peter Gabriel, Black Sabbath, King's-X, Alice In Chains, The Smashing Pumpkins, and many others.

Marshall will be offering a signed amplifier by one of their legendary artists and Avid Distribution are giving away one of their Eleven Rack systems worth nearly £800. Acoustic players are equally well looked after with Faith and Freshman Guitars offering mouth watering prizes. You can win these prizes through the charity raffle at the show, charity auction or through an exclusive Express And Echo giveaway.

More giveaways, prizes and amazing deals means one day simply won't be enough: luckily our weekend special ticket should take care of that problem. Tickets available now in-store or online, with concessions for students and under 16's.