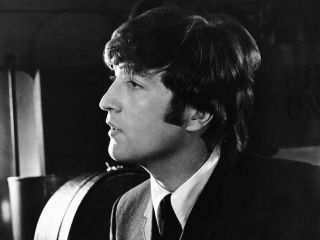 John Lennon in 1964. Next Saturday, 9 October, would have been his 70th birthday (Image credit: John Springer Collection/CORBIS)

Yoko Ono, Julian Lennon and Sean Lennon sat down recently to discuss John Lennon. With the anniversary of what would have been the former Beatle's 70th birthday approaching next Saturday (9 October), the three talked to CBS correspondent Anthony Mason about their memories and feelings.

During the interview, which will run in the US tomorrow (3 October) on CBS Sunday Morning, Julian Lennon talks about his father's legacy, saying that, "Now, more than ever, I look back with a great deal of respect for him as a man - and his work. But not necessarily as a father."

On how he's had to make peace with John's second wife, Yoko Ono, Julian said, "t's just not worth the stress. It really isn't. The stresses and the strains. I think the key point to all this, for me at least, has been Sean. If I hurt Sean's mother, then I hurt Sean. It's a roundabout way of thinking about things. But, because I love Sean so much, I just don't want to hurt him…I can get over it. [I] have gotten over it."

Perhaps the most fascinating and reveal portion of the interview features Julian and Sean discussing their relationship publicly for the first time:

Sean Lennon: "Julian is the reason I started playing music actually. Because when I was a kid I remember when his record came out. And he was, you know, the biggest thing that existed in the world."

Sean Lennon: "Actually, he taught me how to play guitar…I remember him teaching me the song Faith by George Michael."

Sean Lennon: "But the truth is Julian was like my hero. He is still is."