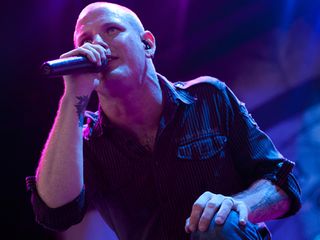 Slipknot drummer Joey Jordison says the band will continue without Corey Taylor if he chooses to exit his role as frontman. Taylor has expressed concerns about carrying on with the group following bassist Paul Gray's 2010 death. Jordison, however, is firm in his stance that Slipknot will record and tour again.

"As far as I'm concerned, Slipknot's my baby and I have a bunch of [new] songs written," Jordison said last month at the Golden Gods Awards in Los Angeles. "And I'm in rehearsal right now with all the guys and it's completely on fire. Donnie's [Steele, a former Slipknot bassist who soon will act as the band's touring bassist] doing a great job. And as far as Slipknot's concerned, it'll always exist - with [Corey] or without him. So that's it."

Jordison added that the band's upcoming run of festival shows (which includes a headline slot 10 July at the Sonisphere festival in the UK) would be "amazing... And I think certain people will wise up after that."

The drummer's words were more than likely directed at Taylor, who has been on the fence about the future of Slipknot. "It all comes down to the band at the end of the day and how we handle it," Taylor said recently, referring to the summer dates. "And if we can come together as men and handle it the right way and do it for the right reasons - do it for the fans, do it for the family - it could be the first of baby steps to see what happens in the future. The wonderful thing and the worst thing about this band is that there's no other band like Slipknot, so we handle things the way we handle it."