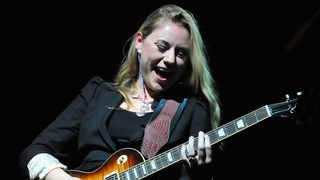 "That probably gives the wrong impression," she laughs. "I'm not going to suddenly start doing acid-jazz albums or anything. But I am a big fan of reviewing, looking back on what I've achieved and thinking about what I can do to improve. I think that's how you can shake things up. So, yeah, the live record feels like I'm closing a book, and now I'm off to start something new."

On a somber note, Taylor admits that the recent death of her mother, who passed six weeks before the May recording of Songs From The Road, "kind of informs my thoughts of the record. I was just coming off that experience, as she had been sick from cancer. So, in that way, too, I feel like it's all one big chapter that's finished."

Fans of Taylor's feral guitar solos and gritty, soulful vocals are snatching up tickets for her upcoming UK dates. Before hitting the road, the British-born guitarist, who divides her time between her homeland and Detroit, sat down with MusicRadar to talk about English musicians' fascination with the blues, her new love of Les Pauls and how a gear mishap caused her to rethink her sound.

In a recent interview, Bill Wyman warned new blues fans to avoid what he called "dull and boring music," that it could put them off the blues.

[Laughs] "Well, that sounds about right!"

Of course. He advised people to listen to Muddy Waters, Elmore James, Little Walter and Jimmy Reed. What do you think - good suggestions?

"Well, firstly, Bill gets to say whatever he likes 'cause he's a living legend. Secondly, having been to his house, I can tell you that he has a huge music collection and is a big supporter and lover of the blues. So hats off to him. You know, if a young kid is getting into it, maybe listen to guys like Stevie Ray Vaughan, Hendrix, Bonamassa - those are great players to start off with.

"When I was a kid, I had my dad's collection. He was a harmonica player, and so, because of him, I knew who Sonny Terry was, and Brownie McGee and Big Bill Broonzy - guys like that. But it really took Stevie Ray Vaughan to open it up for me. I think, just being a young person, it was easier for me to get what he was about; the songs were quite catchy and poppy, so that's what got me to go check out the older artists. If I would've heard them from the get-go, I might not have appreciated them. It's a big jump for a 14-year-old to get into Booker White or Robert Johnson - some of those recordings are 100 years old. Start easy with the big electric guys."

It's always fascinated me the degree to which British musicians revere American blues artists. It happened in the early '60s with the Stones, and it's still the case with… well, people like you!

[Laughs] "I think that's been the case, sure, but the US has also looked to the UK. There was the British Invasion and all the other bands that followed that first wave. I think, in part, it's just more exotic when something's from another country. I mean, we got Hendrix - he didn't make it in the States and come over to the UK and get picked up by Chas Chandler. But in regards to the blues, it's an American art form, so we're always gonna see the American stuff as the real deal and more legit."

You've been playing a Les Paul a lot lately -

"Yeah, nowadays. I do play Teles and Strats, depending on what the song calls for. But yeah, it's predominantly Gibson."

What drew you to the Les Paul, though? Was it a particular player you admired?

"It's kind of an odd story, really. For 10 years, I was a diehard Telecaster player and never played anything else. My main guitar was a 1966 Esquire. There was a big sentimental value to it because it was my first proper guitar. Finally, after a couple of instances, it got damaged by overzealous airline employees. So I decided not to travel with it anymore; I certainly don't fly with it. It stays in the UK and just does close tours."

"I was looking for another main guitar. I'd never really played a Les Paul. My dad had one, but I could never really play it; they tend to be heavy, and they have big necks. We decided to use one for the last studio album because we had a rock song, Tied & Bound, and we wanted a particular sound. We went to Gibson, and I picked one out. It was a little lighter, and it had a '60s-type neck, a little slimmer. I kind of fell in love with it. I had been doing a lot of practicing, and I felt that a new guitar made me tidy up parts of my playing, getting rid of some sloppy habits. I love the Les Paul. It's not as versatile as a Telecaster or a Strat; it's a big, heavy, domineering sound, which I do like. So it's working out."

Because you also play rock, do you feel as though it allows you to take more liberties with the blues? You're not a traditionalist.

"I don't know. No, I don't think I'm a traditionalist, but I wouldn't say that I'm pushing boundaries like Jack White. I think I'm a mixture of influences. I'm not predominantly a blues player, but obviously that's a huge influence on me. But yeah, there's the rock and classic rock - Free, Paul Kossoff, Gary Moore, Clapton and all kinds of '60s stuff. It gives you a nice wide area to draw from. As a songwriter, I listen to a lot of different stuff - soul, Prince, Motown. I try to include everything into my style."

You've been living in Detroit part of the time. What brought you there?

"Yeah, for about four or five years it's been my US base. It came about from wanting to tour the States. It can be difficult for UK artists to tour here - there can be so many snags and delays - so I sort of decided to just do it myself, making phone calls and booking dates. I had a support band in the UK on a recent tour who were from Detroit. I love it here. I've made a lot of good friends, and it's been a really good base for me. It's made a lot of sense."

"In terms of the female guitar player thing, it's always been male dominated," says Taylor. "But I do see that changing a little bit." © Lee Millward

Let's talk about Dave Stewart. He was pretty important in your life as far as your getting started. He got you in his band when you were, what, 16?

"Yeah, that's right. Dave was hugely important, really. He gave me my first break and mentored me as far as my deciding to be a songwriter as well as a guitar player. One of the things that he said to me that's always stuck with me was 'You can have the greatest guitar solo in the world, but if it's not in a good song, nobody's ever gonna hear it.' Which is true. So he got me into listening to people like Bonnie Raitt, and plus, he helped get me on the road and started me touring. He's been hugely important."

Other than Bonnie Raitt, which songwriters did you pay attention to? I'm curious…

"It's a real mixed bag. I have very eclectic tastes, so I just tried to soak stuff up. I wasn't listening to study per se; I was just enjoying what was out there. In the early days, there was a lot of Jeff Buckley, and then there's Nick Drake. Let's see, there's Bob Dylan and Joni Mitchell. I'm also a huge Prince fan. There's Randy Newman, Billy Joel - people like that. But people do underestimate the blues players - Freddie King wrote some great songs, you know? And Stevie Ray's Love Struck Baby - that's a great pop song."

Talking about Dave Stewart reminded me of a story about you playing with Annie Lennox. Your fuzz pedal went out, and you had to play with a clean tone. But Stevie Wonder loved it and complimented you on your sound.

"Yeah, yeah. I mean, it was kind of choreographed that I was gonna hit my pedal and get some sustain; as soon as I did that, I would walk towards Annie. I did it, hit the pedal, but as I'm walking towards her, I realized that the pedal hadn't kicked in. I wasn't going to turn around and mess with my pedals - thousands of people were watching - so I just went with it. Yeah, Stevie sent his drum tech to find me to say that he loved my clean bluesy sound. Of course, I claimed that it was intentional. [Laughs]

"After that incident, it made me want to get back to basics a bit. It's one of the hardest things in the world, to just play with a clean sound, a pure sound. I mean, you don't really need all those pedals, especially if you can get sustain out of your fingers on some wire and wood. I'm messin' around with that a bit - it's pretty interesting."

A lot of players rely on effects to cover up shortcomings in their playing.

"Yeah, I mean, Eric Johnson is a perfect example of a guy who totally has it in his fingers, but he uses effects to amplify what he's doing. He never masks anything."

"Yeah, I guess so, not in a bad way or a pressure way. Every now and again, a dad will bring his daughter to see me 'cause he's a fan. She just started playing guitar in school, so he thinks that seeing me will inspire her. That's nice. In terms of the female guitar player thing, it's always been male dominated, but I do see that changing a little bit. There's certainly more females playing guitar than when I started. One girl can open the door, but to do so, she's going to have to be like Hendrix - the ultimate best of her generation. I don't know who that will be. I think we're getting close."

Well, maybe it's you.

[Laughs] "I don't know. It might be somebody practicing in her bedroom right now. You never know."