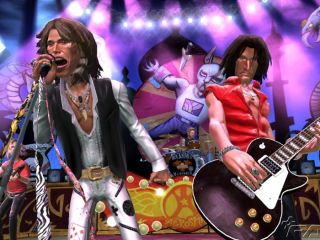 Aerosmith are the latest band to make $$ from Guitar Hero

It's been a source of much controversy among real musicians, but Activision's Guitar Hero game has certainly helped put the music of Aerosmith, Foo Fighters, Muse and Smashing Pumpkins in front of a new generation of gamers and wannabe rockers. And the bands are turning their gaming cameos into hard cash.

Indeed, Irving Azoff, of Aerosmith's Front Line Management says videogame deals can be "much more lucrative than anything you can do in the record business." And according to the Wall Street Journal, a person close to Aerosmith says the band expect to make more money from the game title than from any of their dozen-plus studio albums.

But according to Jimmy Page's manager, the Led Zeppelin guitarist has repeatedly turned down offers from both Activision and MTV for a Zep-styled game and his stance is not going to change.

Page has long been highly protective of Led Zeppelin's recordings - he oversees the remastering and any remixing of reissues personally.

But Chris Hicks of leading gaming site CVG thinks it's a shame. Hicks tells MusicRadar: "In order to make the Guitar Hero tracks, I imagine Activision need access to the multi-track recording master tape. Whilst I think Jimmy Page is being slightly overcautious, I can see he might be worried that someone would remix the songs in a way not to his liking.

"I'd say a Led Zep version of Rock Band/Guitar Hero would be the jewel in the crown for whoever managed to get it. Zeppelin songs are as much a part of pop culture as The Beatles and are associated with guitar music. There's not a single person who plays these games who wouldn't give their right arm to play The Immigrant Song."

Not that Guitar Hero is really playing guitar, of course.

There is one band managed by Q Prime who are more likely to take Activision's money. A special Metallica-only edition of the Guitar Hero game is predicted to be released in early 2009 on the back of their forthcoming Death Magnetic album.

Is it good news that Page is making a stand?