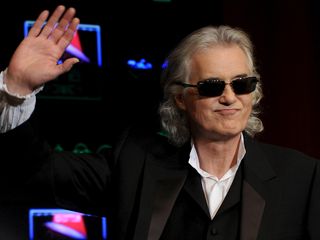 Although Jimmy Page is one of the most influential guitarists in the world (his riffs, his sound, even the way he holds his instrument - they've been analyzed as scrupulously as the Mona Lisa), he brushes off the adulation and says, "I'm not a guitar hero."

According to Page, that title belongs to the musical pioneer Les Paul, who passed away last August.

"I can't think of a greater guitar icon than someone who has the musical intellect to change what was there before, and take music in another direction," Page told the Daily Telegraph. "That's a guitar hero for me."

Surprisingly, Page said that he felt he never truly "mastered the guitar. Either I was playing it or it was playing me, it depends how you look at it. As a kid, the only things I had to do was go to school, do my homework, and play guitar."

Still, he keeps at it. "I play maybe every other day now." he said. "But I don't think of it as practice. I want to see if there is a new shape, a new pattern of chords, a new riff. I'm always looking for the creative spark. Always."

Having just issued the new Gibson Custom Shop Jimmy Page "Number Two" Les Paul, an astonishing replica of the '59 Sunburst he purchased in 1973, Page is now looking to find that creative spark by releasing fresh material.

"The most important thing for me right now is to make some new music," he told Mojo magazine.

In the recent documentary It Might Get Loud, Page previewed two recent compositions, Embryo Number 1 and Embryo Number 2. Whether either of those cuts makes a finished Jimmy Page album remains to be seen.

Been a long time since...

And what about that white elephant in the room? That's right, Led Zeppelin. With bassist John Paul Jones tied up for the forseeable future in Them Crooked Vultures, the possibility of a Zep reunion looks dimmer and dimmer.

In Page's view, "You'd better ask Robert Plant what the future of Led Zeppelin is. Musicians can always play together but I don't think you can go out with a band called Led Zeppelin if you haven't got the original vocalist."

Sounds as though he's still be keen on getting the old gang back together.