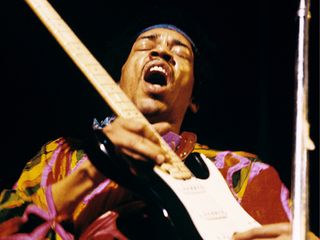 "Jimi Hendrix was not murdered," says Bob Levine, who was the US manager of the late guitarist at the time of his death in 1970. "Despite the allegations that have recently been made, I need to set the record straight once and for all. Jimi died an accidental death, but he definitely wasn't murdered - not by Michael Jeffrey, his UK manager, and certainly not by anybody connected to him. The whole thing is one giant lie."

Levine's statements counter a claim made by Hendrix's former roadie, James 'Tappy' Wright' in his 2009 book, Rock Roadie, that Jeffrey drunkenly confessed to him in 1971 that he murdered the guitar icon by stuffing his mouth full of pills and then washing them down with bottles of red wine.

"Tappy wrote that Jeffrey was afraid that Jimi was going to leave him for a new manager," says Levine. "He also said that Jeffrey had taken out an insurance policy on Jimi that was worth a couple of million dollars and that he wanted to collect on it." (Jeffrey would die himself in a place crash in 1973.)

"All of which is ridiculous," says Levine. "I was Jimi's US manager, and Michael Jeffrey was Jimi's UK manager. Michael also oversaw a lot in the US, but he was involved in other business enterprises. Michael wasn't always Jimi's manager - Chas Chandler, who was in The Animals, was managing and producing Jimi at first. The three of us, in fact - myself, Chas and Michael Jeffrey — all saw Jimi together in 1966 at the Café Wha in New York City. You could tell he was going to be a huge star even then.

"After a few years, Chas and Michael had a split," says Levine. "They broke up Chandler-Jeffrey, and it was decided that Mike was going to run the UK office and I'd look after things in the US. Tappy Wright worked in the office for Mike Jeffrey. He did a variety of things, among them acting as a roadie for Jimi. He did some roadie work for Ike & Tina Turner, too."

Regarding Wright's claim that Jeffrey murdered his star client, Levine says it was all cooked up to sell books. "I used to talk to Tappy every day," says Levine. "I've known him since the early '60s. He told me he was putting together a book about his years in the rock world. That's fine - everybody has a right to do a book if they can. But he told me, 'Bob, I need a hook for the book. I need a handle.' He needed something that would be a grabber. Well, saying that Jimi was murdered is a grabber; saying that Jimi was murdered by his manager is an even bigger grabber. But it's certainly not the truth."

Hendrix during a concert in West Germany, 1970. © Dieter Klar/dpa/Corbis

According to Levine, the night before he died, Hendrix was out on the town in London. "He did a bit of clubbing, and then he went back to his hotel to get a few hours of sleep because he had to catch a plane to Germany the next morning.

"He was with a girl who did give him some sleeping pills - Jimi always had a hard time sleeping, so he'd take pills to make him sleep. He had some wine, too, and went to sleep. But when it came time for the wine to come up - he had to vomit - he was literally knocked out by the pills, so he choked on his vomit."

Hendrix's body was found in a room at the Samarkand Hotel, west of London, on 18 September 1970. Although the room was listed to Monika Dannemann (who died in 1996), Hendrix was alone at the time. There is no record of who called the ambulance crew that discovered the body. "People weren't very good at keeping such records at the time," says Levine. "The actual death certificate from Scotland Yard read: 'Accidental Suffocation.' That was signed by the medical examiner."

All of which makes Wright's assertions, in Levine's words, "pure baloney. He says that he called the retired medical examiner in Australia, who told him that Jimi didn't die accidentally, that it was a result of 'foul play.' Now, come on, that's right out of a Stephen King novel or something. An 80-year-old medical examiner suddenly changes his mind after 40 years and tells some guy who's writing a rock star tell-all something like that? Totally ridiculous."

"I told Tappy, 'What are you doing making up this story? So you want to sell books - why do you have to print such lies?' And he said to me, 'Well, who's going to challenge me? Everybody's dead, everybody's gone. Chas Chandler, Michael Jeffrey, Mitch Mitchell, Noel Redding…they're all gone. Nobody can challenge what I write.'"

In Levine's view, "Jimi Hendrix died by accident. He was a happy guy, looking forward to making music. And Michael Jeffrey didn't have it out for Jimi in any way. I talked to him the day before Jimi died. He had major plans for Jimi. The future was very bright at the time. The whole thing about Michael taking out a life insurance policy and wanting to collect? That's in Tappy's imagination, too.

"Michael signed an insurance policy on Jimi that the record company took out, and Jimi was aware of this. But that's standard. Frank Sinatra was insured by Reprise for millions of dollars. That's how business is done. Record companies take out insurance policies on major artists all the time. But it was nothing ruthless or dastardly on Michael Jeffrey's part. This is Tappy rewriting history."

Now retired in living in Florida, Levine says that he's saddened that Wright's story might have found a way into Hendrix folklore. "It's totally unfair to Jimi," he says. "It's unfair to everybody who was around at the time. I just think it's really unfair to the fans, to anybody who ever loved Jimi Hendrix. Yes, he died a tragic death, and he died much too young. But spreading these lies that he was murdered? It's utter crap, and I've been silent about this for much too long."