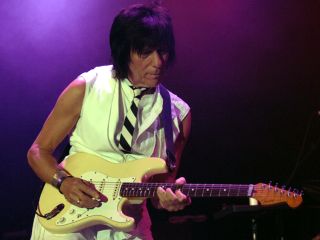 Guitar icon Jeff Beck is set to perform at the Grammy Museum in Los Angeles on tonight, 22 April. The performance, scheduled for 7:30pm PST, will be webcast live at KLOS.com, with a radio broadcast of the event to air on KLOS FM at 10pm PST.

Which means those who want to listen on the East Coast of the States have to tune in to the webcast at 10:30 pm EST. And for those in the UK, hey, 3:30am BST isn't so bad, is it? Set your alarm clocks accordingly.

Undoubtedly, Beck will perform selections from his new album Emotions & Commotion, a record that might not have seen the light of day. During the making of the disc, Beck suffered an accident with potentially fatal consequences for a rock guitar legend: he chopped off the top of his finger while slicing a carrot.

"It was a really non-glam event," Beck told the Financial Times recently. "I only noticed it when I put it under a tap, there was this chunk hanging down. I thought, at least it's joined on, so I folded it back and then I just temporarily lost it. I crumpled to the floor and thought, That's it. I won't be able to play again."

A surgeon sewed the fingertip back on, but Beck had to finish the album using just three fingers on his fretting hand. According to the guitarist, "There're a couple of dodgy solos in there."