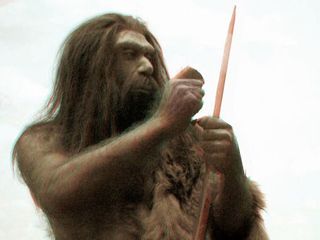 Jazz composer Simon Thorne recently received a rather unusual commission - to recreate the sound of Neanderthal man for an exhibition in Wales.

The music is now being used as a 'soundscape' for the Palaeolithic section of the Origins Of Early Wales event at The National Museum Wales in Cardiff. This features such items as a Neanderthal hand axe and teeth.

The BBC reports that Thorne visited the cave where these treasures were found as part of his research. However, he's conceded that it's impossible to work out exactly how Neanderthal music - if, indeed, such a thing existed - might have sounded.

"It's a ridiculous notion to suggest we could ever know the precise role that music played in the lives of the Neanderthals, but imagining it has been a fascinating experience," he said.

As well as being used as part of the exhibition, the 75-minute work is also set to go on tour: four singers and stone instruments will be packed onto a bus and taken round Wales.

Presumably, this will be a Flintstones-style foot-powered vehicle of some description.

A sample of the soundtrack can be heard on the BBC News website.