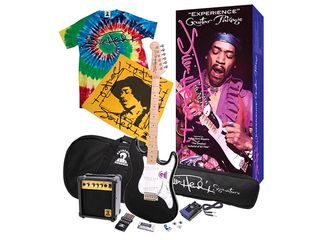 With the international guitar-playing community either still reeling or seething in reaction to the news of Gibson's new, somewhat Fender-esque Jimi Hendrix Signature instruments, Janie Hendrix, Jimi's sister and CEO of Authentic Hendrix LLC, has spoken out.

In an interview with Guitarist magazine, Janie Hendrix emphasised the importance of affordability in line with Jimi's own efforts to "give back to young musicians", saying "We thought, Y'know if Jimi were alive he would really have wanted to do this."

But why Gibson and not Fender?

"It was Gibson who saw a vision from the beginning and was willing to work with us. I mean we (Authentic Hendrix) don't have anything against Fender, we have no bad blood, but it's just that we have built a better relationship with Gibson over the years."

In response to accusations of exploitation of the Hendrix name, Janie had this to say:

"I guess I would have to quote my dad, and my father would say, Well, we own it. Jimi was our family member and we'll just make sure that we take care of him the best way we can. What Experience Hendrix has done has proven that we are committed to keeping Jimi's legacy alive and intact and bring it to you in the most authentic form.

"As far as creating instruments for people to play, I'm also on the Guitar Center board and the mission is to give to underprivileged kids who really want to play instruments, and if all of this can help kids to be inspired - the young Stevie Ray Vaughans, the young Jonny Langs, the young Kenny Wayne Shepherds - then I don't see anything wrong with creating a beautiful musical instrument that's also art."

"First of all we will begin re-releasing the core albums but not as you know them right now. They'll have the same covers but they will be packaged differently in more of a Digipak, including a DVD and more content.

"Then we have an album that is as yet untitled; it's going to be various pieces of Jimi's songs from his early career in Paris until he passed away. It will go from 1966 to 1970; some songs are different versions - there's an amazing Bleeding Heart on there and there are other songs that you haven't heard; different covers of songs, plus a couple of gems of songs that have never been heard at all. That will be a single album that will be released around February 2010.

"Then of course we have The Royal Albert Hall, released next year. It's basically reality TV as we know it today; there's a camera crew, several people that followed Jimi, Mitch and Noel around in Europe and they did two concerts at the Royal Albert Hall. You get to see what Jimi was really like! He's in his own environment, backstage, in his apartment, on trains, planes and automobiles, checking into hotels - living the life on the road that he did. That will come out later on next year."

This is set to be followed by a Jimi Hendrix Anthology project. To read the full interview, visit the Guitarist magazine blog site.