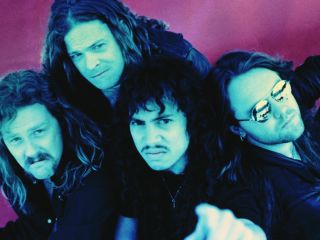 This past weekend, Metallica held their first-annual Orion Music + More festival in Atlantic City, New Jersey, performing their sophomore album, Ride The Lightning, in its entirety for the first time ever (albeit in reverse tracklist order), and their 1991 self-titled fifth album that became known as the 'Black Album' (this one, too, was played in reverse).

James Hetfield: "It's absolutely crazy, that was the song that I thought was least Metallica, least likely to ever played by us, the last song anyone would really want to hear. It was a song for myself in my room on tour when I was bumming out about being away from home. It's quite amazing, it's a true testament to honesty and exposing yourself, putting your real self out there, and taking the risk, taking a gamble that someone's either going to step on your heart with spikes on or they're going to put their heart right next to it, and you never know until you try.

"That solidified, I think, that we were doing the right thing, writing form the heart about what we felt, and you can't go wrong that way. It has become an unbelievable song live, and from the New York Hells Angels putting it in their movie to sports people to people getting married to it, all kinds of stuff, people relate to it. I'm grateful that the guys forced me to take it out of my tape player and make it Metallica."

Kirk Hammett: "We kept putting it in the set and taking it out until we were certain we were actually able to play it. I had to relearn that whole intro part to play by myself onstage, which was a little bit intimidating for me at that point, we never had a song that started that way. After a while, once we got it down, it was no problem. Once we put our sights onto whipping a song into shape and getting it together and ready to play, we're pretty good about putting it together and making it happen."

Don't Tread On Me

James Hetfield: "Don't Tread On Me, I love the song, but it shocked a lot of people, because everyone thought it was pro-war when they thought we were anti-war, and alls we're doing is writing songs, we're not standing politically on any side. Don't Tread On Me was just one of those 'don't fuck with us' songs, and obviously referencing the flag and the snake and what it meant, that all tied into the black album and the snake icon on the album cover, and I think it's great to play that song live. We're over here in Europe playing it, and people aren't appalled by the songs. We haven't played it in Iraq or Iran yet, though."

Kirk Hammett: "There's a certain amount of songs we know we have to play, because the audience expects us to play them, and songs we throw in because we feel like playing or get requests. The great thing about our music is most of it is really, really fun to play, and very dynamic, dynamic enough so that if we wanted to change part of a song or add a part, take out a part, it can pretty much survive that.

"When songs start to become a little tedious, what we'll do is just change them, take parts out, add parts, or make it more dynamic, and that's our way around getting around the whole boredom factor, which I think is a good approach, an honorable approach."