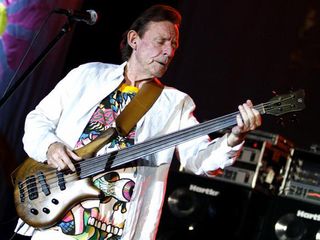 Bruce says he was just having "fun" with Zep (Image credit: Sayre Berman/Corbis)

Legendary Cream bassist Jack Bruce says that he has received death threats over disparging comments he made about rock giants Led Zeppelin.

The bassist made those comments at the Classic Rock Awards, and the next day, during a radio interview, he went one step further, stating that "Jimmy Page ain't no Eric Clapton…the only decent guy in that band is dead."

He laughed during that interview, adding, "you know my sense of humor."

Some - or a lot - of Led Zeppelin fans didn't find Bruce's remarks so funny, but the bassist insists that the whole thing "was just a bit of fun and it was blown out of all proportion."

Try as he might to diffuse the situation, Bruce, who lives near the Suffolk-Essex border of England, does admit that "some Led Zeppelin fans were really angry at me and I had a few death threats - they're not likely to find me out here though!"

Bruce went on to say that in this day of Twitter and YouTube, he has to watch his words carefully, and that "we always used to have a pop at other bands in the old days and that was all it was.

"It was like I had spoken out against the Queen or something," he marvels. "You obviously can't say anything against Led Zeppelin."