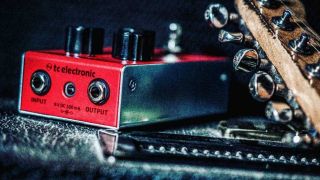 UPDATE: TC Electronic has confirmed it will be releasing a whole new range of pedals tomorrow (Friday 21 October) morning. Get excited, folks.

Those crazy Danes are at it again: TC Electronic has been awfully busy on its Instagram account teasing not one, but five new pedals - at the very least.

What can we draw from their coy photography and infuriatingly cheery messages? Why, a number of things…

From what we can gather here, we're looking at a whole new pedal line. Judging from the knobbage (technical term) on display, we'd put our money on an overdrive/distortion/fuzz or two, but that 100mA rating points towards some digital architecture somewhere along the way.

Perhaps we can expect a competitor to Boss's Multi-Dimensional Processing drives, as seen in its OD-1X and DS-1X? Or maybe it's an entirely new concept altogether…

Whatever the story, rest assured, we'll let you know as soon as we possibly can.