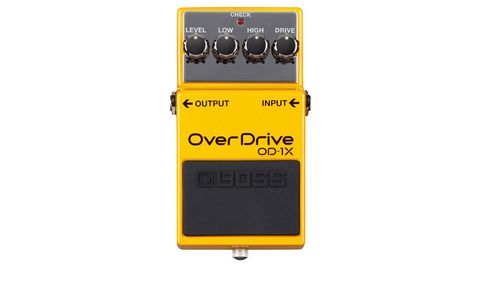 Not, er, dirt cheap, but it will give you a different dirtbox experience from just about everything else around.

A radical and iconic design when launched in 1978, the basic size and shape of the Boss compact pedal hasn't changed, but the innards certainly have, exemplified by its latest models, which takes the legacy of its earliest compact - the OD-1 Overdrive (1978) - and runs with it.

While the new 'Special Edition' OD-1X might have recycled the name and colour scheme of its forebear, it's a quite different pedal. Unlike the analogue original, this delivers its overdrive using the digital Boss Multi-Dimensional Processing (MDP) technology - as found in the DA-2 Adaptive Distortion launched last year - that aims to provide the perfect amount of dirt for each frequency range.

This pedal has a bit more bling than a standard Boss unit, with shiny knobs on a mirrored backplate. You also get four knobs rather than three as, besides the standard level and drive/distortion, there are low and high tone knobs.

The OD-1X provides a wide range of tones of the overdriven amp variety, from a cleanish boost up to a fully-cranked amp. It seems to have a scooped midrange character, with tone knobs that offer plenty of variation, while being sensibly voiced - the treble either taking a little edge off or brightening things up without getting harsh, and the bass filtering out unwanted weight or adding a nice girth.

What is really apparent is that you are getting overdrive with sharpness and clarity: hit a chord and you'll hear all the notes with no mushiness, and there's a really different dynamic to more standard pedals - it's very responsive as you hit harder for more dirt.

There have been some stand-out guitar tones created over the years, using pedals with variations on op-amp and diode-clipping circuitry, and we are more than covered for those, via every boutique and mainstream builder, including Boss itself with the DS-1 and OD-3. Perhaps it's time for guitarists to get a new set of tools for tone creation, so who better than Boss to drag pedal technology into a new era?

Let's not get carried away, though - it's just overdrive after all. But it is a different overdrive, that might just be responsible for some stand-out tones in the future.