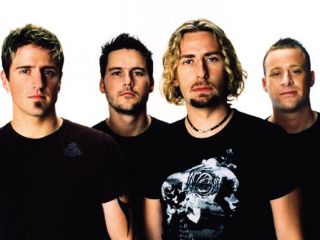 More than a few nickels back

We must admit to being somewhat impervious to the appeal of Nickelback. But hey, somebody surely likes them, and probably for all the right reasons too. Since 1995, the Canadian post-grunge rockers have sold millions of CDs and have established themselves as reliable sellers of concert tickets, merchandise, and whatever else they can slap their name on. So it's hardly surprising that Live Nation has said, "Let's make a deal!"

And what a deal it is: worth between $50-$70 million, the wraparound package is for three albums and tours and will come into effect after Nickelback's current arrangement with Roadrunner Records expires in two albums' time. Live Nation will also handle the band's DVD sales, broadcast rights, fan club, website and literary rights. (Literary rights? O-kayyyy.)

Nickelback becomes the fourth superstar act to join the Live Nation Artists roster, along with Madonna, Jay-Z and Shakira, with the previously announced U2 deal expected to be completed in the coming months.

Wraparound deals - or "360s" - while not yet commonplace, have been occurring with increasing frequency during the first half of 2008. For superstar artists who have proven themselves to be consistent international sellers, the lure of guaranteed cash windfalls and one-stop shopping in terms of marketing have their obvious benefits. But some have speculated on the negative impact such mega-deals could be having on smaller acts and baby bands, groups that have recently seen "artist development" staffs at record labels downsized or shuttered completely.

"Live Nation is picking the MVPs from the majors"

According to music business attorney Ronald S. Bienstock, Live Nation's wraparound deals are having "little to no impact on smaller acts." Bienstock, who handles Dream Theater, Porcupine Tree and Living Colour, among others, likens the deals that Live Nation is doing to baseball. "Only instead of scouting the bush leagues for talent, Live Nation is picking the MVPs from the majors and forming their own all-star team."

Still, Bienstock admits that rising gas prices and a sagging economy are making a difficult touring market tougher for young bands and groups with cult followings - and he thinks Live Nation could throw its considerable resources around in other areas. "The company has bought some small venues, but not many. If they wanted to, they could buy clubs and mid-sized venues, put small tours together. Obviously, they can't operate as a charity - the reason why they do deals with superstars is to hedge their bets - but there are ways they could help the business as a whole, and they could do it quite easily, I think."

And that might just be worth the cost of doing a deal with Chad Kroeger.