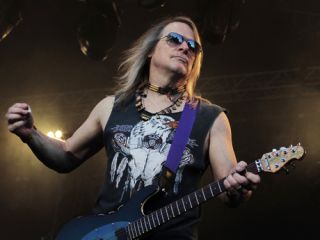 "It's amazing we all found the time to make this album," says guitar legend Steve Morse. He's talking about Flying Colors, the record which also happens to be the name of the quasi-supergroup he came to form last year. "Everybody in the band is so busy, but when we realized that we had this chance, we had to grab it."

Comprised of Mike Portnoy (drums), Neal Morse (keyboards, vocals), Dave LaRue (bass), Casey McPherson (lead vocals) and Morse, Flying Colors is a genre-defying entity that combines pop, rock, folk, prog and metal into one captivating, effervescent whole. It's the kind of band that Morse and his bandmates have made their marks in before, with common ensembles being the uncommon progressive giants The Dregs (Steve Morse and LaRue) and Transatlantic (Portnoy, Neal Morse). Still, Morse stresses that rehashing past formulas wasn't on the agenda.

"Most of us have co-mingled musically," says Morse. "But the main thing we tried to do was throw out any preconceptions of what we should be doing and concentrate on doing something extremely fresh. We wrote and recorded a song a day, so 'fresh' wasn't something we had to dig too deep for. It was right there."

MusicRadar sat down with Morse recently to talk about how Flying Colors cooked up such a winner in record time. We also discussed whether the much-in-demand players could possibly find a slot in their schedules to tour sometime this year. And we even hit the guitarist up to answer some of the many reader questions that came our way.

When the idea of doing the Flying Colors album was presented to you, what did you think?

"I was into it, although the idea started out as, 'Do you want to write a record with Neal Morse and Kerry Livgren [from Kansas]?' In my mind, I was hearing a regal, symphonic Kansas meets the Dregs kind of thing. But Kerry had a stroke and the plans got changed.

"Mike Portnoy got involved - see, everybody's involvement sort of overlapped at this point. Then I suggested Dave LaRue. Mike had mentioned the bass player from Transatlantic [Pete Trewavas], but I thought we'd end up as the same band, with the only difference being that I was on guitar. So Dave came in. Next we had to figure out a singer.

"For a second, we talked about bringing in a famous person, but we realized that it would be lopsided if we did that. To me, the cool thing about the band was going to be the writing experience, the collaboration. Us with a big famous singer, someone who might have a lot of control over the music, that wasn't what I pictured. Luckily, we found Casey, who was just the right kind of guy."

Before you all got in the studio, were song ideas being sent around?

"Neal sent a song that he had already written, and then I had the unfortunate task of saying, 'Let's not do that.' His song was great, but it was so finished that I couldn't see what anybody else could bring to it. That wasn't the goal for this band, in my view.

"We did get together to do some writing before we got in to record, though. Neal came down to my studio for a couple of days. We wrote and had a great time. It was funny, though: Normally, I'm the one spewing out ideas like a machine gun and overwhelming people; this time, it was Neal who was throwing everything out to me. For every one idea I had, he had seven!" [laughs]

How long did the album actually take to record?

"Nine days all in. But there were some important changes to be done at the end of it; for instance, Casey and Neal's lyrics were totally different from the finished product. As we recorded, they came up with lyrics that had the right vowel sounds, but they weren't things they wanted to say. So the lyrics were worked on and changed. The same thing happened with my solos, which I redid. Actually, I redid a lot of the rhythms, too. [laughs]

"There's another important element to this, and that's Peter Collins, the producer. Because we were five people with ideas and strong personalities, I really didn't want us to fight about stuff - or should I say, strongly disagree? [laughs] So Peter was a tie-breaker guy. He'd stay out of the way a lot and let us do what we were doing, but he gave a sort of running commentary that was crucial."

You've played with some of the greatest drummers in the world. How does Mike Portnoy affect what you do as a guitarist? Do you lie back a little, or do you push harder?

"Playing with Mike was pretty incredible. The song All Falls Down was something he came up with - he thought we needed something more super-technical that showed off our chops. He played that bass drum continuously through the song, just doing everything perfectly in time. What I did was kind of ignore him, to listen to him as a perfect click track.

"It can be funny playing rhythm guitar, because you try to support the vocals and weave in and around them, to give them the underpinning. With Mike, I found that I would play to him at times - I couldn't help it. At one point, he did what amounted to a drum solo, and it was just unbelievable. I was just laughing, going, 'Oh, man, we have got to keep that!'"

So you never get jaded playing with virtuoso musicians? They still blow your mind?

"Oh, they blow my mind all the time! [laughs] That never gets old. It's just like hearing a joke: if it's funny, it'll still be funny every time you hear it. Playing with musicians of this caliber, you can't help but notice what they can do - because what they do is almost physically impossible. No, I never stop being floored."

On the song Blue Ocean, your solo sounds like a real mixture of improvisation and structure.

"Yes! They wanted a longer solo than what I normally would have done. Coming from The Dregs, particularly in the old days when we were pretty much playing for free, I would watch people's reactions. It made me come up with a music balance that made people stop and listen. But I do try to make the solos count, to hint at the melody but take it to a real interesting place."

Kayla seems to be built around Dave's bass. Was that always the intention?

"Well, there was more stuff in there. The mixing engineer took out a lot of my guitar so he could concentrate on the vocals. I thought my stuff sounded great, but… See, we handed the record off to Michael Brauer, who's an old-school analog king of mixer. I was the most affected by what he did. He couldn't take all of my guitar off, 'cause there's guitar everywhere, but a lot of my stuff is gone. The end result is still great because the band is so good, but as a guitarist, it's kind of weird."

What's the deal with the band playing live? Do you think it's a possibility?

"Oh, yeah. We've already looked into one possible hole in the schedules, and then that got filled in - on my end. We do have a shot at doing something in August and September, which is sort of in danger because of Deep Purple. It's real stressful for me, because I'm the guy who could wind up torpedoing things, which I certainly don't want to do. We'll see."

Luiz Felipe Bier asks, How do you feel about the G3 tour you're going to do with Joe Satriani and Steve Vai?

"Well, finally! [laughs] At long last I'm able to do something like this - every time I've been asked, I've always been gigging. I'm so looking forward to this. Joe and Steve are two guys who play differently, but they have a lot of things in common, which is very admirable. To always be improving the way they do, I'm so knocked out - and envious. They have vision, ability… at the highest level."

Leon Jurdzinski wants to know if there are any cheap guitars that you think are great to play?

"I bought both a Squier Strat with humbuckers and a copy of the Music Man Axis. Both of them were made in the Orient - I don't know if they're making them anymore. They're good, although stuff does break occasionally. Buying a copy is a little tricky - you never know what you're getting - but if you get the right one, it's good value for the money."

John Patton wants to know what routine you follow to prepare for a performance.

"My warm-up routine is this: I practice every day, and then I make sure I get 45 minutes to play before the actual gig. What I can play easily at home, when I'm warmed up and at the peak of my practice period, is way above what I can do on demand in the middle of a song. So I have to be two to three notches better than I think I need to be."

Ben Jardine asks, Do you have any custom Music Man guitars that are not on sale to the public?

"Yes, I do have some prototypes. I've never been a collector, but I realize that I should hold on to them because they represent Music Man history. I've given some things away in the past, but I have to stop."

Sebastian Goldswain asks, Let's say you're doing a guest spot with a band who's invited you on stage, but the house amp isn't something you'd normally use - how do you get the "Steve Morse sound"?

"Well, I won't be able to get my sound, but I can play in the sweet spot of the amp. If it's a country piece, I'm not in too bad a shape. If it's rock 'n' roll, I'm going to use the neck pickup but only go to the bridge pickup when I'm very low on the neck. I would play more abrupt, angular ideas."

Caio Victor asks, Of the guitar players who have been influenced by you, who do you consider to be good? Zakk Wylde comes to mind…

"Wow! I can probably name 20 gold-plated guitarists who have no flaws. Zakk Wylde, John Petrucci, Jimmy Herring - they're unbelievable. I mean, I don't know if Zakk's influenced by me. We did get to jam together once, and that was awesome.

"You know, I've been fortunate enough to hear Joe Bonamassa say some very nice things about me, and I think he's just like Stevie Wonder on the guitar. When he was younger, he could do anything, and now, the more time he gets on this earth, he just gets better and better. These are guys who blow me away - and there's more."

And finally, Mike Colburn asks, If you could choose any musician for a project, who would be in your uber lineup?

"And Stevie Wonder, too. He can play anything he wants."