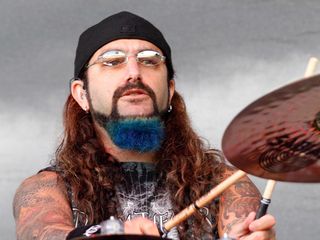 "Yesterday was Adrenaline Mob's first real rehearsal, and we sounded amazing," says Mike Portnoy. "We recorded our album earlier this year, but we never stood in a circle before and fired up. It was electric. I couldn't believe what was happening before me. I think people are going to get pretty excited once they see us."

That will happen this Friday (24 June), in fact, at The Hiro Ballroom in New York City, when Portnoy and his new outfit - frontman Russell Allen (Symphony X), guitar virtuoso Mike Orlando (Sonic Stomp), bassist Paul DiLeo and guitarist Rich Ward (Mojo/Fozzy) - make their live debut, playing a heaping portion of their upcoming CD with, according to Portnoy, "a couple of covers. Originally, we were going to do more covers, but our own songs sound so good, I think most of the set is going to be Adrenaline Mob." (Check out a sampler of the band's music on their Facebook page right here.)

Former earlier this year, while Portnoy busied himself with a slew of projects involving Neal Morse and Steve Morse, among others, as well as playing in his beloved Beatles tribute band Yellow Matter Custard, Adrenaline Mob "didn't require overthinking," says the drum legend. "It wasn't a master plan to join this band, but once I heard the material, I was in."

Since leaving Dream Theater and Avenged Sevenfold, you've been involved in so many projects. How did Adrenaline Mob come about?

"I've known Russell Allen for over a decade now, and I've always thought he was a very underrated singer. He has one of the best voices in the business I've ever heard. I'd call him something of a modern-day Dio - he's that phenomenal. As much as Symphony X has a good following in the underground cult prog world, I always thought that Russell was more undiscovered than he should be.

"I took Symphony X out on tour with Dream Theater in 2007 in Europe, and I remember watching them from the side of the stage every night. I was simply in awe of Russell. His voice and his stage presence totally floored me. And not to put words in his mouth, but he's said that he would watch Dream Theater and study what I was doing. He always liked that I was a rock drummer in a prog band - not to dismiss my prog influences - and he always thought I was more of a harder-edged, metal kind of drummer.

"The two of us have always talked about doing something together, and as soon as I found myself an independent artist once again, it was obvious that the time was right. Quite coincidentally, Russell and Mike Orlando had been working on this material for the past year and were looking to put a band together. The minute Russell found out I might be available, he called me and asked if I'd consider the situation. I popped in the music they sent me, and that was it - I was in. The tunes were that strong."

When did you cut your drum tracks?

"In March. At that point, we also found Paul DiLeo on bass. I cut the drums in Mike Orlando's place in New York. The whole thing took about a week, which is basically the time frame I need to do all the albums I do. When things are really clicking, I don't need any more than seven to 10 days."

Were you involved in writing the lyrics? Some of the words sound like they might stem from your recent experiences.

"No, I wasn't. I know how you might assume that, though. Some of the lyrics have a 'looking-back, looking-ahead' kind of quality. I think the words are things that everyone can relate to. But I didn't have any influence on the lyrics in this case, no."

Mike Orlando is a very impressive player. I've heard of him before, but he really dazzles on these cuts.

"He's remarkable, isn't he? Truly New York's best-kept-secret, in my opinion, but not for long. He's like a three-pronged monster. He's got riffs for days - he reminds me of a Dimebag in the kinds of riffs he comes up with. That's one side of him; the other side is that he's a complete shredder. He can play solos right up there with the biggest guitar heroes out there. And the third side is, he's a wonderful engineer. He's got his own studio, and he knows how to get the most awesome sounds. Talk about a multi-talented guy. I think this album will break him out of his anonymity."

Did Mike Orlando produce this album?

"Yeah. I mean, I guess the end result will read that it was self-produced by the band, but Mike was really the engineer and mixer behind everything."

What is the plan for the band?

"The plan is to get this album out asap and hit the road asap. Everybody in the group is energized by the music and the power of the album we've just completed. We're amazed at the electricity we felt playing together yesterday, so we're dying to take this on the road. We want to try to take a different approach from any of my other projects, whether it's Liquid Tension or Transatlantic or my cover bands - those have been kind of one-off things. With Adrenaline Mob, we really want to treat this as a real touring entity. A real band. It won't be our only band, but it'll be something we come back to.

"The album is strong; it's only of those records where every song's great. So I don't think the appeal will rest solely on my following; I think we can really spread out and develop a new audience. We're psyched about the New York unveiling this Friday, and we're looking forward to getting out there before the album hits, which will probably be by the end of the summer or early this fall."

Over the years, you've played many different drum kits. What kind of set will you play with Adrenaline Mob?

"What I used on the album was a Tama kit that Mike had, but what I'm going to be playing Friday is a kit that Tama is road-testing with me, a prototype of a new line they're introducing. What I take on the tour with me, we'll have to figure that out. But I'll probably go big with it - definitely two bass drums, that's for sure. This is a full-on, aggressive metal band."

You've always been extremely hands-on in your bands. Will you be involved in every aspect of Adrenaline Mob?

"I don't know. With Dream Theater, every creative aspect of the group went through me. I oversaw it all from top to bottom. I enjoyed it, and that's how I operated. With the bands and projects I've been involved in this past year, I've worn several different hats, and that's been fine. I'm enjoying different roles. In Adrenaline Mob, I'm not the leader, but I'm on the board of directors, and that's OK. I'm not stressing out over every detail. I'm sharing the load.

"At some point I might need something where I can call the shots more, because that's just my nature. But right now, it's a refreshing breather for me to share the workload and the decisions. I've done the opposite for years, so a break is welcome."