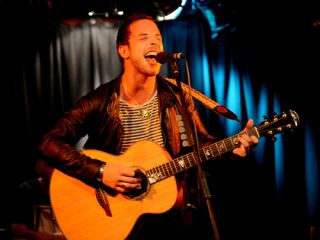 British singer-songwriter James Morrison caused a sensation in 2006 when his debut album, Undiscovered, made him anything but. His smooth, effortless voice sounded like a fresh update on Steve Wonder, propelling pop-soul gems like You Give Me Something and Wonderful World to the top of the charts.

Morrison followed up that smash with 2008's Songs For You, Truths For Me, a critical and commercial triumph, which included top 10 hits You Make It Real and Broken Strings (the latter a duet with Nelly Furtado). Last year, the Brit Award winner made it three for three with The Awakening, a deeply personal work that has already yielded the chartbreakers I Won't Let You Go and Up.

Having just begun a sold-out US tour, Morrison sat down with MusicRadar to talk acoustics, his guitar influences, how he writes and demos, and all things soul.

You play in so many different sized rooms. How do you go about getting a good acoustic guitar sound night to night?

"I admit that I'm not the most technical person. I just like what I like, and that's a warm, crisp sound to my guitar. I think a lot of it comes down to what kind of guitar you play and what pickup you use.

"For the last six or seven years now, I've used a Fishman pickup. It's got a nice warm tone - really full, really musical. You can batter your guitar and it won't distort too much, which is important for me because I play with my hands a lot - I don't really play with picks.

"I've got an Avalon guitar - that's the company that used to be Lowden. They come out of Ireland, and they're like these folk kind of guitars. You can pick 'em, you can strum 'em - they're quite good. I used to Gibson Hummingbirds, and I was quite happy with them, but I got a newer one and it was a bit… I don't know, I just didn't like it. The older ones are good, but they're not as reliable on stage as the new ones. And because I don't want to break an old Hummingbird on tour, I decided that I like the Avalons now."

You haven't talked much about your guitar influences. Growing up, which players made an impact on you?

"It's weird, really. All the really good guitar players - Jimi Hendrix, Jimmy Page, or even Bert Jansch or John Martin - I love all those people. But I didn't start out thinking that I would be a guitar player. In the beginning, I played the guitar so I could sing. I mainly concentrated on my voice.

"I'm learning on the guitar all the time. Just last night, I sat around jamming, learning my scales, doing that whole thing. I kind of piece it all together, but I can be quite stubborn. I want to learn all the scales, but I want to work it out my way. It's taking me a lot longer than it should, stupidly, but for some reason my brain just remembers it better if I do it myself and relate it to things I've played."

What made you gravitate towards the acoustic guitar?

"Well, I love the electric guitar, but I never felt like I could get good enough on it to really sort of 'own' it in a sense. If you plug an electric in, you'd better be able to fucking rip it up, you know what I mean? I could never do that confidently. I mean, I can sit in my room and rip out a lead and really enjoy it, but on stage is a different thing. I'm getting there, though."

What about other acoustic fingerstyle singer-songwriters, like James Taylor or Donovan? Have you listened to them much?

"Yeah, yeah! A lot of those guys have an influence over what I play, sometimes subconsciously. I do like players who cross the line between folk and soul. I try not to play too much funk sort of pastiche guitar and all that. I tend to listen to people who do really good licks and chords. I think that's why I like Stevie Wonder, as well. No only is his voice so amazing, but some of the chords and inversions he does, they're unbelievable."

More than a few great singers have said that they fell in love with their own voices very young [Morrison laughs uproariously] - they're not boasting, but rather, they knew early on that they were meant to sing. From your laughter, that probably wasn't the case with you.

"No, no, it wasn't. I don't know, it's a weird thing. I used to record my voice when I was younger and play it back and think, Aw, I could've done that better. I was maybe 10 or 11, and I taped myself in my room on a little tape cassette recorder.

"Actually, it's always something I've been paranoid about - not paranoid but worried. I always want my voice to be better than what it is; I always to have more range and a clearer voice. It's something I'm constantly working on. But I've never really felt like, 'Yeah, my voice is sick!' [laughs]

"Some nights it all comes together and the gig is amazing - I sing well and execute all the notes, the ad libs and bits - but that's a momentary thing. My voice is my voice because of the music I love. If I'm close to that music, then I'm going to be singing well."

What was your agenda going into the new record? In an interview last year, you said you were sick of singing ballads.

"I just wanted to get rid of all the preconceived ideas about me - but not worry about it too much, either. My main goal was to come out of the studio with an album I could be proud of, and if it didn't do well, I'd still feel the same way; to make a proper record that people could put on and not categorize as 'pop' or this or that - I wanted to people to just 'get' it.

"I was going for something that was more classic soul/folk. I wanted it to be live, I wanted it to be personal. Just the fact that I lost my dad and had some other things going on in my life, it made me reassess what I was doing musically. So I wanted it to be a record for me and not to fulfill any idea of what it should be."

How do you write? Do you have a set way, or is there no way?

"Usually, the best stuff that I write - what I feel is the best stuff, anyway - is when a feeling comes over me. You know when you just look out the window late at night? Your mind is searching for things, you want answers… I don't know, but it's like that. I just play my guitar and hum a melody, and if something happens, I'll get a rough structure together, some chords, and I'll let my subconscious ramble out lyrics."

The novelist Richard Peck once said, "We don't write what we know. We write about what we wonder about."

"Yeah! Exactly. All the best songs are ones you don't have to think about - they just kind of write themselves. But those kind of things don't come very often."

Do you make elaborate demos? Also, what kind of system do you work with?

"I used to do elaborate demos, but I found that it got in the way with trying to imagine it in the studio. You get that 'demo-it is' thing where you can't get past the demo. Now, I keep everything really simple: acoustic guitar, a vocal, maybe some keys and bass. That's the thing I try to do - write it and put it down in a simple way without all the production.

"Depending on who I'm working with, I've been using Pro Tools and Logic. I just try to get it in the pocket. On my second album, a lot of the demos got screwed over, the songs got missed, because the demos were either too produced or the sounds weren't right."

Singing with Jessie J on the song Up, was that always the idea?

"No, not really. It was a very personal song about my dad, and I wanted strings on it. Towards the end of making the record, the song sounded too prog-rock. It was a little slow, and it didn't have the impact I wanted - it didn't glisten. Mark Taylor remixed it, and he put a female vocal on it. He said he wanted it for the harmonies, but he put her on the verse and suggested that maybe I do a duet.

"I wasn't too sure about it. I had already done a duet on Broken Strings, and I kind of wanted to get away from that. But then I heard it, it sounded good, so I started thinking of who I could put on it. Jessie J was one of those people who immediately came to mind. Adele's amazing, and if Amy were still around and wanted to work with me, that could have been nice.

"I kind of like the difference between our styles, me and Jessie. She's very R&B/pop, and she's an icon, whereas I'm more of a singer-songwriter. It's a good mix, really."

Slave To The Music has some really cool electric funk guitar. Is that what you heard when you wrote the song?

"No, not at all. In the beginning, when I wrote it, it was more half-reggae, and it had like Indian strings. When I listened to the demo, it sounded really wrong. I wanted it to be not too poppy, a little more tribal. It took on a new thing when we got in the studio, more stomping and funk feeling."

Growing up, you listened to the classic soul singers - Otis Redding, Al Green. Is there anybody good now? [Morrison laughs] Anybody new that you like?

"That's good - 'anybody new?' [laughs] Yeah, I like Jamie Lidell, and then there's Gavin DeGraw - he's got a sick voice. Amos Lee, he's pretty good, and so is Daniel Merriweather. Amy Winehouse is definitely one of my favorite female vocalists of all time.

"You know, it doesn't always have to be that sort of black R&B voice. I like singers with emotion, people who you believe, who aren't pretentious. There's a guy called James Vincent McMorrow, and he's a bit folky, sort of like Bon Iver. I really like that style, as well. Anybody who can engage you, who is urgent - as long as they're revealing something, that's what does it for me."