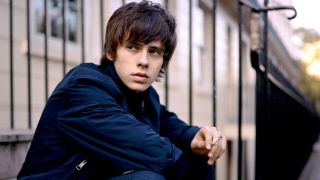 Jake Bugg is no ordinary 18 year old. Friendly, chatty, polite - he's about as far from a surly teenager as you could possibly imagine.

Oh, and he's already toured with Noel Gallagher, soundtracked the Olympics, and is about to release a debut album that fuses rootsy rock and killer melodies with astutely observed vignettes of 21st century life and Dylan-esque musings. MusicRadar caught up with Nottingham's boy wonder to talk guitars, gigs, and recording on mobile phones...

You seem to be everywhere at the moment, things must be pretty manic?

I'm just on tour at the minute, it's the last gig of the European leg. It's been incredible to be honest. They've all got in early doors, and the response has been amazing, especially in Italy, which was really great. Florence was crazy, I was playing Someone Told Me and they all started cheering and clapping half way through a verse, and I didn't quite know what to do, I just had to keep the guitar line going. But it's been a great tour, and this is the last show of the European leg with Noel and then I go off to America with him, which will be cool.

Have you been to America before?

No, never. But unfortunately I can't take the band, which is a bit crap, but it's still going to be an amazing tour I'm sure. It's just going to be me and the guitar. I was doing that for a few years before I met the band so it's just like being back to my roots really.

How's it been touring with Noel?

I've spoken to him quite a bit and got to know him. I gave him a copy of the album, and yeah, it's been better than anything I could imagine really.

Has he had any pearls of wisdom for you?

Well, you know, the only wisdom you can really give is just practice, that's the best thing you can do.

The album is released now, you must be excited for it to finally be out there?

Definitely. I believe it got put out in Holland and got to number 3 on iTunes, so I'm very happy and excited to see what it's going to do back in the UK. And obviously it's a big thing for me, I should think it's a big thing for any artist, the first album, so yeah I'm really excited.

Where did you record it?

Well we recorded in various places. Some of it was done up in Lark Lane, in the Motor Museum up in Liverpool with a guy called Mike Crossey, which are the tracks that have the band on. And then some of them were demos which were done previously in the year, and a couple that I'd done in the studio last year. And then the last song was done on my iPhone. I love recording. It's great to be in the studio, chilled out and just enjoying it.

The record has a great live sound

Yeah man, all of it was live, that's the way I like to do things. Except a couple of them, like Taste It, Trouble Town and Lightning Bolt, they were demos, and Broken was a demo as well. We didn't even try recording them again. The record label thought they sounded great, so I was happy that I didn't have to do it again! All the rest of them are live. I definitely wanted that kind of sound, but I also wanted it to sound slightly contemporary, to have a contemporary twist to it. And I just wanted to mix things up a bit, see what happened. I'm very happy with it to be honest.

Did you have a firm track listing in your head of songs that you knew had to be on the album, or did it change as you went along?

It shifted it and changed a bit, 'cos I'd written a couple of new ones. I'd written Lightning Bolt not long ago, and Two Fingers, so some songs had to go. But some of the ones stayed on from when I was like 15, 16, which was great. Some Place, that's probably the oldest one on there, I was about 15, 16 when I had that. And then there's Country Song, Someone Told Me, they're the oldest ones on it.

Where there any surprises in how things turned out, or was it all pretty straightforward?

Well yeah, it was quite surprising, it was great to see how it was shaping up, and the last track was recorded on my iPhone so that was a surprise that the label wanted to use that as well. It was just a demo, I had an idea for a song and I put it down, and then they wanted to use it which is great, 'cos it means I get the producer points on it! I just want more young people to start picking up guitars and start writing tunes again you know? That's one of the things I hope to achieve with this album, just to inspire young people to start writing tunes again.

What's your history with the guitar? How did you get started?

Well I came back from football training when I was about twelve, and my uncle was there with a three quarter steel string acoustic guitar, and I learned the basics on that. I went on to buy a Fender Squire acoustic full size, and then a Yamaha acoustic which was great. I always wanted a Martin 000-15SM, that was my dream guitar, and then when I got signed I went out and got it, which was amazing for me.

Is there anything that you'd like to get your hands on in the future?

I'd love a Gibson L1 like Robert Johnson used. I'm going to have a look at a Martin on Wednesday as well, so I'll see what that's like.

What is it about Martins that does it for you?

Well they sound great. But it don't matter what the make is really, you know? My Yamaha guitar, it was only 150 quid, but it sounds great cos I've played it for quite a few years now and the wood's just mellowed out. Price don't always matter. You can pick up a one and half grand Martin guitar and it just sounds dud, so it's whatever sounds good man. I really love my guitars. I've also got a Fender Stratocaster and a 1952 Telecaster reissue. It sounds great. At the minute I'm using a Hughes & Kettner amp that sounds really good.

Have you checked out Noel's set up at all?

Yeah I had a quick look at it earlier actually, he's got some really nice guitars. I had a go on one of his Martins which sounded great. He's got the don gear!

Do you use much in the way of effects?

I have a vintage tremelo pedal, 'cos there's a big pedal shop in Nottingham called Hot Rox where I think the Arctic Monkeys and all those guys get their pedals from, they have a load of pedals. I've got a vintage tremelo, a Holy Grail reverb pedal, and a Boss Blues Driver.I had a wah pedal as well, but it's suspiciously gone missing, I think I might have been using it too much. It's for rehearsal only but I think the manager got a bit sick of it and confiscated it.

What are the albums that you always go back to for inspiration?

Oh well there's quite a few, you know? I've got every Beatles record, every Jimi Hendrix record, Oasis, the Stone Roses, Donovan. I've just been listening to Nick Drake's Pink Moon, that's a great record and John Martyn's Solid Air, that's great too. If it sounds good, I'll listen to it. I've just learned Pink Moon the other day, and Hazey Jane too. So I've been messing around and have learned a few bits and bobs. And slide guitar as well, I've been dabbling with that.

Who have you been listening to for slide?

Well Robert Johnson is the obvious choice, a bit of Son House and Muddy Waters, you know, the list goes on but they're the main ones really.

Are there any contemporary bands you're listening to at the moment?

There's a little blues band up in Dundee in Scotland called The Boston Tea Party, they had a cool vibe about them, and a band called Southern from Belfast, they're just getting on to the scene. So you know, I like to support up and coming people. I know when I was starting out it's great for people to take interest in your music and to give you advice and stuff, so I try my best.

November, and then another one in February. November I've got a girl called Natalie Findley from Manchester, and February I haven't chosen yet. I like to pick my supports.

Are there any gigs you're especially looking forward to playing as a headliner?