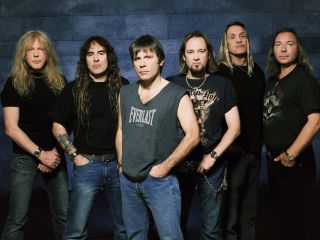 Six: the number of the best

18th February saw Iron Maiden triumph at the Brit Awards for the very first time in an incredible 33-year career. A public vote handed the band the Best British Live Act award, and fanbases don't come much more passionate or devoted than Maiden's.

Back in September 2006, Guitarist magazine's Rob Laing caught up with Iron Maiden's three-pronged guitar attack on the eve of the release of A Matter Of Life And Death, the band's 14th studio LP.

Why do you think you've stood the test of time?

Janick Gers: "We've had our highs and troughs but we've always done what we've believed in and liked. The circle of what's cool comes around, you can't let the tail wag the dog.

"We've just kept going and come out the other end. If you don't, you can end up as one of these bands that just jumps on trends, whether it's hairspray metal or grunge."

Adrian Smith: "We played the songs we did in the early eighties on the last tour and because of the way we recorded them, they haven't really dated. You hear some of the music from that decade with a drum machine and you can date it to the year: a studio engineer can listen to it and know what drum machine it is!

"We've never overproduced our albums. It has always been about the playing and we've never hidden behind production so the music doesn't date, it just sounds like us."

Are you surprised that there hasn't been another big metal export from the UK since yourselves and Judas Priest?

AS: "Yes, but it's got a lot to do with timing. The eighties was the right time - a real springboard. There was Def Leppard as well, but they were more of a rock band, Saxon were great and they were doing well in America but I don't know what happened there as they never became really big.

"It's very much right place, right time, with the right management; there are a lot of things involved. Being a team really helps as a band; a lot of bands have a shelf life because they implode with internal problems. But I suppose it is strange that there hasn't been one since to take it to that higher level."

Live After Death is regarded as one of the best live documents ever made. How did you get such a great sound?

Dave Murray: "I was using 50-watt Marshall amps so it was basically a straight sound but I had this Pete Cornish pedalboard with an MXR Phase 90 and Distortion Plus. We're kind of going back to that kind of minimalism now. We've gone full circle to a more pure tone."

AS: "When you listen to yourself live initially you can't stand it. You'll say, that doesn't sound like me! It can be a really painful experience. Most people seem to consider that album a high point but at the time I never really considered it as anything special. It was just us, warts 'n' all - we never did many overdubs on it.

"But I watched the Live After Death video before we did the Dance Of Death album, and I really enjoyed it. Sometimes when you're closely involved with something you can't really see it for what it is at the time. But I think it stands up quite well."

How do you find life on the road now compared with when you first joined the band?

DM: "When we were in our early twenties it was a piece of cake!"

AS: "At first, it was all quite new to me because I'd never toured properly. I'd played clubs and pubs in England, playing from a couple of hundred people to a man and his dog!

"In the band I was in before Maiden [Urchin], I was going to gigs on the bus with my guitar and a plastic bag with my wah pedal in it. To go from that to earning a wage every week, having a tour bus and playing in front of two to three thousand people, it was a huge novelty.

"But as Maiden got more popular, the touring became quite a grind. I probably appreciate life on the road more now because we don't tour as much. We usually do three or four months on the road and you can really focus on it and know you're not going to burn yourself out."

What's the most frequent Spinal Tap incident on the road?

AS: "We do refer to that film a lot - and if we have a little bit of trouble or take a wrong turning on the way to the stage, we'll shout Hello Cleveland!"

Where in the world can the most dedicated Maiden fans be found?

AS: "In the early years, it was always Manchester, Glasgow and Liverpool - those really hardworking areas where football and music meant a lot to people, because they didn't have a lot of prospects then.

"It's probably the same with South America nowadays, but then how do you explain us selling 100,000 tickets on a Scandinavian tour? But we've played extensively throughout the world over the last 30 years and built up a following the hard way, never relying on videos or hit singles. That kind of following for a band is particularly loyal…"

DM: "We've never got much radio play at all - we've always made our reputation as a band on the road."

JG: "It's also great to play to people who have never seen us live before - especially young people. That's what I really get a thrill out of because I remember seeing bands when I was a kid for the first time, and I really want to help recreate that experience for a whole new generation. If we do that, it makes the band stronger."