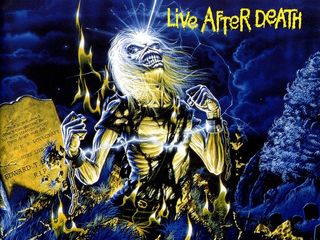 The greatest live album of all time? We wouldn't argue with Eddie...

18 February saw a fan vote hand Iron Maiden their first ever Brit Award for Best British Live Act. Although the smart money was always on Maiden's fervent fanbase to vote them to victory, recognition from the UK industry has been a long time coming.

Why should you care? Here are ten good reasons…

1. Their live prowess is well documented

We can think of good live albums, we can also name very good live albums, then there's Live After Death. Captured - with apparently little or no overdubs - at Long Beach Arena, California on the band's gruelling Powerslave tour in 1984, it's everything metal should be.

Musicianship as tight as their spandex, spirit, fire, brimstone, band mascot Eddie as a giant Egyptian mummy and a tour de force of classic anthems. Hear this and you'll want to see this band.

A whole 24 years after the release of Live After Death, Maiden came back with their Egyptian stage set on the Somewhere Back In Time tour to prove very little has changed. They are still a jaw dropping force live, except now more popular than they've ever been as dads bring their children along to pass the torch of Maiden fandom.

Maiden can still play the 13 minutes of Rime Of The Ancient Mariner like their lives depend on it and show a whole new generation why even the juggernaut that is Metallica are still not quite worthy in comparison.

3. They knew when to put the old gang back together

Bringing Bruce Dickinson and Adrian Smith back into the Maiden fold at the same time in 1999 was a canny move. The Blaze Bailey-fronted lean (or wasted?) years had witnessed Maiden soldiering on, playing significantly smaller UK shows than they had in their eighties heyday.

Fans kept the faith and were now rewarded. Cue a comeback tour, a return to much improved form with the Brave New World album and the added bonus of a three-amigo guitar attack with Smith, Dave Murray and Janick Gers.

4. Their back catalogue is unrivalled

No other metal band has a run of releases that can even remotely rival Maiden's seven-record run between 1980's classic eponymous debut - with Paul Di'Anno on vocals - and 1988's conceptual Seventh Son Of A Seventh Son.

Between them were songs that would inspire a generation of metal musicians and countless pub arguments over the merits of the underrated Killers and whether the second side of Piece Of Mind lets it down.

Heavy metal has a reputation as being music for idiots. That's not just unfair, it's also completely inaccurate - and nobody proves it more than Maiden. They are metal's most bookish band.

Founder/bassist Steve 'Arry' Harris is not just extremely well-read, his passion for classic literature has inspired numerous Iron Maiden songs: To Tame A Land (based on Frank Herbert's sci-fi classic Dune), Rime Of The Ancient Mariner (Samuel Taylor Coleridge's 18th century poem of the same name), Lord Of The Flies, The Phantom Of The Opera, Seventh Son Of The Seventh Son (Orson Scott Card) and Murders In The Rue Morgue (Edgar Allen Poe) to name but a few.

6. There's only one Bruce Dickinson

But multi-tasking and flying his bandmates to shows isn't the reason why he's held in such high regards by the Maiden faithful. Bruce's air-raid siren vocal power has remained in remarkably fine fettle after all these years - he can still hit those operatic high notes.

It's part of the reason why Maiden are still such an incredible experience to see live and coupled with Bruce's energy and enthusiasm, it's a force to be reckoned with onstage.

7. They have the best mascot

Everyone should own at least one Iron Maiden t-shirt. Maiden invented much of the imagery we take for granted as being part and parcel of the metal experience with visuals that have consistently embodied the spirit and imagination of their music.

But they still do it better than anyone else. Their past album covers created by Derek Riggs are truly iconic (especially so for the Killers and Powerslave albums), while their skeletal mascot Eddie has become as famous as the band themselves - he's been with them every step of the way.

8. They are Britain's biggest and best metal export

Despite maintaining underdog status and being consistently ignored for years by mainstream media in the UK, Maiden have stomped on regardless to become cherished around the world from Mexico to Malmo.

The UK has produced three of the most influential heavy metal bands of all time in the form of Black Sabbath, Judas Priest and Iron Maiden. But no homegrown metal talent since has threatened to justify a place amongst these three kings.

It makes for even more reason to cherish Maiden; the finest of the trio and still delivering the goods live and on record with their most recent A Matter Of Life And Death album.

Maiden are the ultimate inspiration that sticking to your guns is the best way forward. They were innovators in the New Wave Of British Heavy Metal, but when that faded away they didn't surrender.

When grunge, nu metal and heinous rap metal pillaged the land, they fought on with their twin harmony axes. And now as metal comes full circle and the traditional approach becomes popular again who has the last laugh? Maiden are still top dog.

10. Just listen to those guitar harmonies

Thin Lizzy, Judas Priest and Wishbone Ash innovated the twin guitar harmony sound for heavy metal and rock. We salute them for it. But nobody does it better than Maiden. It's become their trademark and is truly something to behold live - especially now they bring in three part harmony parts on some songs with Janick Gers.

For a masterclass in the art just listen to Aces High, Caught Somewhere In Time, Die With Your Boots On, Phantom Of The Opera and, of course, the genius of Hallowed Be Thy Name…