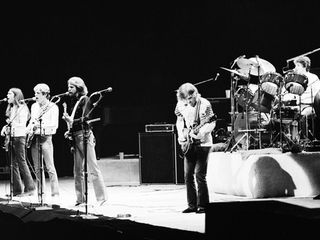 On 9 October, former Eagles guitarist Don Felder will release Road To Forever, his first solo album since 1983's Airborne. MusicRadar sat down with Felder recently to discuss his new disc, a conversation which we will present shortly, but during our discussion we talked at length about the Eagles' classic Hotel California, a song which Felder wrote the music to.

The title track to the Eagles' landmark 1976 album, the track is, quite simply, iconic. Released as a single in February 1977, it topped the Billboard Hot 100 singles chart in May of that year and went on to sell over one million copies. (In 2009, the track received the Platinum Digital Sales Award by the RIAA, representing sales of over one million downloads.)

More than anything, the two-minute guitar solo, performed by Felder and Joe Walsh, has become a must-learn for axe enthusiasts across the world, with dozens of YouTube wannabe stars earnestly attempting to master its every legato lick and nuance.

In the following chat, Felder reflects on the writing and recording of one of rock's best-loved anthems.

How well were the songs you wrote received in the Eagles? Was it hard getting compositions by Don Henley and Glenn Frey?

"No, actually, for every project we worked on, every album, I submitted song ideas, and in the case of Hotel California, the album, I'd say I turned in 15 or 16 ideas. I had a little Teac four-track tape recorder, and I'd go in and make these tracks. Sometimes I'd sing a melody, and other times I'd just give them the track.

"The one thing about Don Henley is, he's a great singer, great lyricist and a great songwriter, but he doesn't play anything. He plays drums. He can't pick up a guitar and write chord progressions; he can't sit at a piano and write music underneath him.

"Bernie Leadon, who had been an original founding member of the band, and I were in a high school band together in Gainesville, Florida. That's how I met the Eagles, through Bernie. But he told me when I first joined the band, if you want to write songs with Henley, just give him music pads. Just write progressions and put them on a cassette. If he hears something, he'll write a melody or he might work with you on finishing it.

"I would write track ideas - introductions, verses, choruses, solos - and I'd put them on a cassette and give them to Don and Glenn. I did this with the songs for Hotel California, and I said, 'If there's anything you like on these cassettes and you want to finish writing, let's do that.' Henley said, 'I like that song that sounds like a Mexican reggae or Bolero.' So he liked the one that became Hotel California, and he also liked Victim Of Love. We finished them up in the studio. With Hotel California, I wrote all the music underneath it, and Don, Glenn and I would talk about concepts for the lyrics.

"Nobody in the band was from California. Bernie was originally from San Diego, but he wasn't in the band ant that point. So everybody had driven into Los Angeles on what used to be Route 66. And as you drive in through the desert at night, you can see the glow of Los Angeles from a hundred miles away. The closer and closer you get, you start seeing all of these images, and these things pounded into our heads: the stars on Hollywood Boulevard, movie stars, palm trees, beaches and girls in bikinis.

"Don came up with the concept for Hotel California, and once we had that foundation for the album, a lot of other songs came about. When you get into the Hotel California and you have a hit, you're the new kid in town, and then once you have a great deal of success in the business, you start living life in the fast lane. Every once in a while, you start to go, 'Is this all a bunch of wasted time, all the years we've sat in bars and turned into parties?' So the concept came out of that framework."

On your original demo, did you have the 12-string intro?

"Uh-huh. That was there, and all the way down to most of the guitar parts on the ending. In fact, when we were doing the guitar parts at Criteria Studios in Miami, I thought that Joe and I would just plug in our guitars - I'd play some licks and he'd play some licks, and we'd just trade off each other. When I wrote the ending, I recorded my guitar parts on a Les Paul and I played Joe's answers on a Strat. I used a different amp so it sounded like a different guy, the way Joe might play it, and then I'd pick up my guitar to do the answer to that - so I emulated what the whole idea would be.

"When we were in the studio, Joe and I started jamming, and Don said, 'No, no, stop! It's not right.' I said, 'What do you mean it's not right?' And he said, 'No, no, you've got to play it just like the demo.' Only problem was, I did that demo a year earlier; I couldn't even remember what was on it. So we had to call my housekeeper in Malibu, who took the cassette, put it in a blaster and played it with the phone held up to the blaster. We recorded it, and I had to sit in Miami and play exactly what was on the demo. Joe had to listen to the way I had emulated him, and he played something very close to that. It was close enough to the demo to make Don happy."

The end solo is such a masterpiece of composition. You can literally sing the entire thing.

"Yeah, well, the reason for that is, when I grew up and started playing the guitar at 10, my father used to listen to all the big bands, all the bands with horns like Benny Goodman. When I got in the band flow, we had a soprano sax player, and I loved Miles Davis, so I always tried to emulate that.

"If you listen to the solo on One Of These Nights, it's almost like an alto sax. I try to play memorable melodies that you can sing. If you play too much, too fast, it's too much to remember. You can't sing Steve Vai. But if you play simply enough and clearly enough, you can recognize it, remember it, sing it and relate to it. On all of my solos, I don't try to be flashy, I try to be memorable."

When you laid down the keepers, what were the guitar and amp combinations?

"I had a '59 Les Paul sunburst, and I plugged into a '50s Tweed Deluxe, a narrow-paneled model - it was probably a '55 or '56. Joe played a Telecaster, but I'm not sure what amp he was using. And I think I had an Echoplex in the loop at that time, but that was about it."

The actual recording of the main song, was it a complicated affair?

"Well, we had to record it twice. Originally, I recorded it in E minor, which is a good key for the guitar. That's the demo I gave to Don. When we got in the studio, that's the way we recorded the basic track, in E minor. Don went out to start singing on it, and he sounded like Barry Gibb in this high voice. I went, 'Wait, wait! That just doesn't work.'

"So I went out into the studio with a guitar, sat down with him and said, 'OK, let's drop it down to D minor,' but that was still too high. C minor - still too high. 'How about A minor?' That was too low. So we wound up having to play it in the key of B minor, which is not a particularly guitar-friendly key, but it was perfect for his voice. And then we went back in and recorded the whole thing in B minor.

"After that, Joe and I filled in the guitar parts, the choruses and the solos on the end. It was a screw-up that we never figured out what key would be best for Don to sing it in, but we never heard him do it until we got in the studio."

Hindsight is a funny thing, but can you remember how you felt when you first heard the song in its completed form? Did you have any inkling it could become a monster hit?

"No, I didn't. You know, the album took us a long time to make, over a year, and the record company was just pounding on the door. They wanted the record, they wanted to put it out - it was the big follow-up to One Of These Nights. So when everything was done and edited and mastered, we had the record company come to a playback party at the Record Plant in Los Angeles. After the song Hotel California played, Don Henley turned around and said, 'That's gonna be our single.'

"I went, 'Don, that's going to be a big mistake.' And I'll tell you why, because in the '70s, everything had to be three, three and a half minutes long. The intro had to be under 30 seconds, so the disc jockeys didn't talk too long before the singing started. It either had to be a rock 'n' roll danceable song or a drippy ballad.

"Hotel California is six minutes, the intro is a minute long, it stops in the middle with no drums, and you've got a two-minute guitar solo at the end. It's the absolute wrong format for a single. So I said, 'Don, I don't think we can do that.' But he said, 'Nope. That's going to be our single!' I've never been so delighted to have been wrong in my whole life." [laughs]

Do you get a kick out of all these YouTube videos with people trying to play it just right?

[laughs] "I have to say, it's really flattering. To me, if you've recorded a thousand songs, and one of them has the success of Hotel California, you've been blessed. It's a really special gift, and it's an honor to see people play it on You Tube. Some people play it very well, and other people struggle with it.

"There was a young kid - I think he's Japanese and he's about seven years old - and he plays the acoustic version with all the solos, the Hell Freezes Over version that I had put together, and he was smokin'! I was like, 'Wow, this kid is unbelievable.' It's a flattering honor to have so many people like that song and want to play it, all the guitar parts. I'm really proud of it."