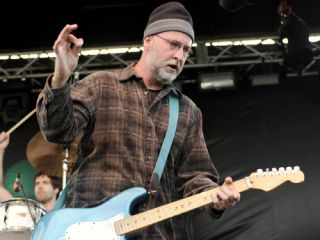 Bob Mould on stage in San Francisco, 2009, with his favorite sky-blue Strat Plus. © Tim Mosenfelder/Corbis

"I love Copper Blue," says Bob Mould of Sugar's 1992 alternative-rock classic. "I loved recording it, playing it, and I love knowing that other people love it, too. Going out and playing it should be a lot of fun."

Celebrating the disc's 20th anniversary, the singer-guitarist and songwriter (whose place in rock history is assured from co-founding and fronting the legendary alt-punk group Husker Du), will perform Copper Blue in its entirety on 24 February with his band, drummer Jon Wurster and bassist Jason Narducy, at the Noise Pop Festival (also celebrating 20 years) in San Francisco. Other acts include The Flaming Lips, Built To Spill and Archers Of Loaf, among others.

MusicRadar sat down with Mould recently to reminisce about the writing and recording of Copper Blue, the guitars and gear that he was used on the album (pay attention, punk rockers: the man knows his equipment) and how many hours and days he's going to spend preparing for the Noise Pop gig.

Going back to something you did two decades ago, is it a bizarre feeling - like looking at an old yearbook?

"Not really. The nearly three years I spent revisiting my life when I wrote my book [2011's Shine A Little Light; Little, Brown pub.], that was hard. Compared to that, going back and extracting one album out of my body of work, and an album that I really like, that's not a problem at all. After you write a book and dredge up all the stuff in your life, doing something like this is something of a relief." [laughs]

Last year, you remastered Copper Blue. In doing so, what struck you about its original sound?

"Just how long it took us to get the mixes right. We were trying to fit a lot of information into a stereo mix. So when I put the tapes back up and listened to them sort of flat again, I thought, Wow, mastering has come a long way! We can do a lot more to this now. [laughs] The tools are a lot deeper. I could widen the stereo feel and bring the bass out down the center. It was a good-sounding record then, and I think we made it better now."

What kind of musician you were back in 1991-'92, when you recorded the album?

"I was in transition. You kind of always are, really, but in my case, at the beginning of 1991, I had left Minneapolis and moved to New York City. My first solo record, Workbook, had come out in 1989, and it was very well received. My second one, Black Sheets Of Rain, came out in the fall of '90, and it was a darker record, a little bit heavier.

"I was ready to change things. The spring of '91 found me back to square one in many ways, business-wise and record company-wise. Prior to this, I had spent a lot of time in Europe, toured all over, and I was writing a lot. I played new songs live before I recorded them, so I could see what was working for people. It was a very interactive period."

In going into Copper Blue, did you have a different mission statement than on previous albums?

"Hard to say. In my mind, I was going in to make the third Bob Mould solo record. Sugar wasn't even a band in my head at first. The songs were probably more melodic and immediate than on the other solo records. I had played the material a lot in various settings, made some pretty elaborate home demos, so when it was time to go into the studio and make a record, I was very prepared."

You had worked with the album's producer, Lou Giordano, before. Did you feel a certain comfort zone with him?

"Yeah. I had a history with Lou. He had been Husker Du's live sound engineer for the last three years of the band, and I had used him for the basic tracking of Workbook. He did a great job on Copper Blue. He kept me focused and got good performances out of David Barbe.

"The band never really played in the room together at any point on the record. It was put together with drums and guide guitar, then bass, and then I piled on all the guitars, vocals, keyboards and percussion. It was an intense month of recording, but we had a great time. Ten songs became Copper Blue, six went to Beaster [a 1993 EP] - it was a very fruitful time in the studio."

What were your main guitars for the album?

"It was my blue Strat, the same one that I use to this day. It's a 1987 American Standard Strat Plus with Lace Sensor pickups. That blue guitar was pretty much the guitar for the entire record. For my acoustic, I used a Yamaha APX with a stereo pickup in it. That got a really nice sound."

What kinds of effects did you use?

"I remember my signal path because I still have it! [laughs] I plugged into a Roland SDE-1000 delay, and then I had an Eventide H3000 SE - I ran stuff from it in stereo and then I compressed it with a DBX 160S two-channel compressor. At that point, I had a left and a right signal, so I had a pair of stacks on each side, with each made up of a Roland JC120 solid-state head, a four by 12 Marshall cabinet and a four by 12 Sonic cab - both of those had Celestion speakers. Also, on each side of the stacks, I had a Fender Concert, a great tube amp with one 12-inch speaker.

"The Roland JC120s were for the faster, tighter low end, and the Fenders gave me that dirty wash on top. They were usually split by 15 milliseconds because of the stereo delay. So it was delay into harmonizer into compressor to the stereo stack.

"Pedal-wise, it was an MXR Distortion Plus, which I still use today. That's the core of the sound: the Strat Plus, the stereo stack and the Distortion Plus."

Even though you had the solo records between things, with Sugar, did you try to change anything sonically from Husker Du?

"I tried to reinvent myself, yes. The last thing I wanted to do was re-create Husker Du with other people. It would have been flimsy, and people would've seen through it. Plus, after eight years of playing in that style, I wanted to become a better musician. I wanted to work on my technique, and I approached songwriting in a different way. There were more free verses instead of structured rhyme."

The band Train covered the song If I Can't Change Your Mind - what did you think of that?

"I was flattered that they took on the song. That was a Brendan O'Brien production, and I think he's a Sugar fan. He might have been the instigator there. It sounds like Train, so it's a re-imagining of the song, for sure."

For the Noise Pop performance, have you rehearsed the album yet?

"No! [laughs] Not at all. When me and Jon and Jason get ready for a show, we run through the set once. I like the tight-wire act with a band. I don't like rehearsing. Everybody knows the songs, so let's go. Having said that, we'll probably play it more than once…maybe even four times! [laughs] That's a lot for me. But I do want to make it great."