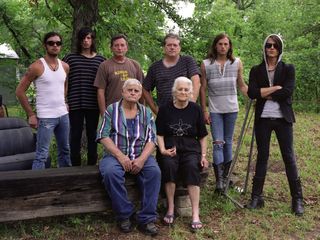 As the saying goes, timing is everything, and this sentiment definitely applies to the rock documentary Talihina Sky: The Story Of Kings Of Leon, which will premiere in the US this Sunday, 21 August, on Showtime at 10pm.

A fascinating and unflinching portrait of the mega-successful family band (brothers Caleb, Nathan and Jared Followill, along with their cousin Matthew), Talihina Sky will be aired just weeks after the Kings Of Leon had to cancel the bulk of their summer tour due to "vocal issues and exhaustion." (That was the official explanation, although Jared, Tweeting shortly after a noticeably impaired Caleb split a Dallas show, referred to "internal sicknesses & problems.")

In a scene that will no doubt go down as prescient in the annals of rock docs, Nathan berates Caleb on a tour bus: "You don't realize - you get drunk and you talk shit to everybody who makes you who you are," Nathan hollers. "You're a piece of shit and your band cannot fucking stand you! I sing every goddamn song for you because your little pussy-ass voice gets hoarse! Fuck you! We have made you."

Even under normal circumstances, this would be difficult to watch. Given recent developments, it's downright eerie.

Culled from over 700 hours of footage, during which first-time director Stephen C. Mitchell, a close confidante of the band, followed the Followill boys to family reunions (we meet some truly outstanding characters) recording studios, arenas and hotel rooms, Talihina Sky is a gripping examination of young artists trying to come to peace with their past as they take on the future.

MusicRadar spoke with Stephen C. MItchell about the making of Talihina Sky. In addition, we asked the director about the Dallas ordeal and his insights into the Kings Of Leon.

How did you come to meet the band?

"I met the boys when I was living in Nashville and working in music publishing. I signed Nathan and Caleb to their initial songwriting deals. At that time, they were gearing up to form the band. Jared came in on bass, and they recruited Matthew - I think it was always in their minds to have a real band.

"During this time, I got the inside scoop on their families, their upbringing, and who these guys really are. And what they are has as much to do with their backstory as it does what's happened to them after they got famous.

"The funny thing is, I never intended on getting into the music business per se. My goal was to always to be a filmmaker. So I was pretty blown away when the boys called me and gave me this chance to make my first film. They had a of faith in me, and they knew I'd present them truthfully."

You don't pull any punches. In fact, there's a couple of cringe-worthy moments, such as when Caleb is berating Matthew in the studio for not playing his guitar parts right.

"And Matthew didn't have a problem with that at all. He thought it was kind of funny, actually. But you know, they really raise the bar on quality in the studio, and they hold one another up to the highest of expectations. Matt does his own pushing and shoving that we didn't show on film. "

Of course, there's the soon-to-be-infamous scene between Nathan and Caleb...

"Yeah, that was something. And the fact that Nathan is filming Caleb while he's yelling at him, too. You know, that's brothers for you. They don't hold back. They say what they want to say, and they just put it out there. As much as they might get on each other behind the scenes in that way, they've got each others' backs. Nathan would be the first one to defend his brother."

But a lot has happened since you finished the film. They've cancelled a tour after the show in Dallas, and the band put the blame squarely on Caleb.

"I wasn't down there at that show. I haven't even had a chance to speak with the boys about it. But they're going to come back big-time, I know it. They're a family, they're tight-knit, and they're going to get through this."

Do you have an idea what might be at the root of the problems?

"I don't. I think what people don't focus on is the fact that these guys are tired. They've been running around touring, making records, doing press, making videos, flying all over the world - they've been doing that for years. After a while, it takes its toll. Since 2002, they haven't stopped. They work their butts off. I'm looking forward to seeing them come back and playing shows."

A lot is made of the band's religious upbringing. And Caleb make the comment about going to hell for signing a record contract. Do they really feel that conflicted about what they do?

"That's a good question. I don't know if I could fully answer that on their behalf. They came from this one world, and now they're somewhere totally different. I don't know if you ever leave your past, but I don't think they look back, either. To do what they do, they have to do that. They couldn't be this big-time rock band if they didn't want to change in some ways."

Of all the family members in the film, Uncle Leo is quite a character.

"He's awesome. We actually lost him a couple of months ago, believe it or not. That melanoma on his head, it ended up being inoperable. It got him, unfortunately. But I'm really proud that he's in the film. The boys had told me wild stories about him, and once I got to meet him I thought, 'Yeah, this is one special dude. A once-in-a-lifetimer, right here.'

"They're all special, though. I think there must be something in the water where the Followills came from that made them the way they are. I've never met the Allmans or the Beach Boys or any of those other sibling bands, but it's got to be some sort of chemical trait when you have guys connected by blood who can all bond together and take on the world as Kings of Leon have."