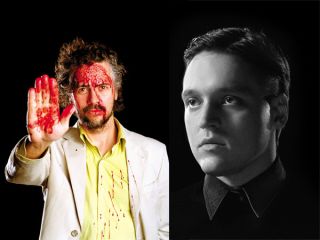 Coyne serves up a king-sized cock punch to Butler

Whoo! Music wars used to be restricted to metal bands slagging one another other off. Then it was the West Coast-East Coast rap war thing. But now The Flaming Lips' frontman Wayne Coyne has started an indie rock cage match with Arcade Fire - and it sure ain't pretty.

To their many fans, Arcade Fire are sincere, serious artists who want to connect with their audience on a decidedly 'anti-rock-star' level.

Not so, says Coyne. Speaking to Rolling Stone, The Flaming Lips man went off on the Canadian collective, tearing them new orifices in places where they definitely don't belong.

"I get really tired of their pompousness," Coyne said of the Fire. "We've played some shows with them and they really treat people like shit. Whenever I've been around them, I've found that they not only treated their crew like shit, they treated the audience like shit."

Coyne's tirade continued: "They treated everybody in their vicinity like shit. I thought, 'Who do they think they are?' I don't know why people put up with it. I wouldn't put up with it. I don't care if it's Arcade Fire or Brian Eno. If either of them walked into a room and treated people like shit I'd be like, 'Fuck you, get outta here.'

"People treat Arcade Fire like they're the greatest thing ever and they get away with it. Those sort of opinions change my view of their music. They have good tunes, but they're pricks, so fuck 'em."

In a post on Arcade Fire's website, Butler responds head-on but with respect for a musician he obviously admires. In point of fact, he appears staggered and befuddled by the whole thing:

"Wow, I can't believe I am actually writing to defend my bands 'real"' personality. I wish I could not respond to something like this, but the reality is that people will be asking me questions about it for the next 5 years.

"I also fear that people will base their opinion of our band on the media quotes of a guy who doesn't even know us."

Says Butler, "The only time we have ever shared a stage with The Flaming Lips was our last show on the Funeral tour at a festival in Las Vegas (over 3 years ago)...we arrived the morning of the show from Brazil, slept all day and awoke into some kind of surreal Vegas jet-lag dream in which we were playing after the Flaming Lips...how strange...

"I was really excited to meet Wayne. Clouds Taste Metallic was a huge record for me, and growing up in the weirdness of Houston, I always imagined Oklahoma City to be in the same universe.

"I was really nervous to meet him and I felt a little weird that we were playing after them. We traded a little hello, but he was a hard guy to get a read on. Steven Drodz [Lips multi-instrumentalist] was super nice, and I felt good after talking to him...

"So...I am not sure Wayne is the best judge (based on seeing us play at a couple of festivals) if we are righteous, kind and goodhearted people. I can't imagine a reason why we would have been pompous towards The Flaming Lips, a band we have always loved, on that particular night, all those years ago.

"As a closing note, the main point that I am offended by in this whole thing is for Wayne to say we treat our audience like shit."

So what do you make of all this? Is Coyne out of line, or is he just keeping it real and telling it like it is? Let us what you think.