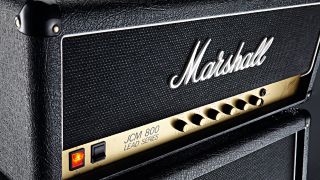 In 1975, Marshall launched its first 'Master Volume' amp, the 2203 100-watt head. Housed inside Marshall's vintage 'Plexi' enclosure, the 2203's only sign of change was a master volume control on the front panel.

That seemingly small difference had a huge effect on the amp's sound, allowing users to overdrive the preamp stage and get high levels of distortion without turning the overall volume up too high.

Marshall redesigned the 2203 in 1981, with the now-familiar white logo on black grille cloth, and full-width gold-coloured control panel, and gave it a 50-watt sibling, the 2204. The range was dubbed JCM800 after the number plate of Jim Marshall's car.

In 1983, the company added the two-channel, 100-watt 2210, with the glorious roar of Marshall's 'Master Volume' circuitry and footswitchable channels, reverb, a line out and effects loop. These amps became the sound of post-70s rock and metal, and secured Marshall's place in music history.

Marshall's 'Master Volume' is rebranded and relaunched as JCM800

Marhsall replaces the JCM800 range with its JCM900 amps