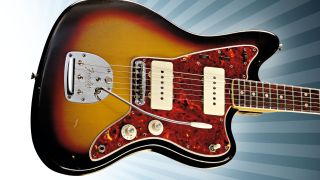 Surf, alt-rock and all that Jazz

By 1958, Fender had matured from a quirky start-up run by the visionary Leo Fender to a relatively slick operation with specialists overseeing R&D and manufacturing. It was time to expand.

Launching that expansion was the Jazzmaster, a high-end electric that continued Fender's ambition to be taken seriously by discerning customers (in this case jazz musicians) and to distance itself from rock 'n' roll, which Leo and company saw as a fad.

Ironically, jazzers never did take to the Jazzmaster as Fender had hoped. Instead, it was adopted by surf-rockers, who loved its unique looks and floating tremolo.

That trem was billed as an improvement over the one on the Stratocaster, featuring a lock that could be set so if you broke a string the others wouldn't slip out of tune. Its circuitry was more high-end, too, featuring warmer soapbar pickups and a dizzying range of tones via its dual tone circuits.

Later, the Jazzmaster became the guitar of choice for alt-rockers such as Television, Sonic Youth and My Bloody Valentine. From refinement to grunge, it was a strangely cool turn of events.

The Jazzmaster is introduced to Fender's electric guitar range