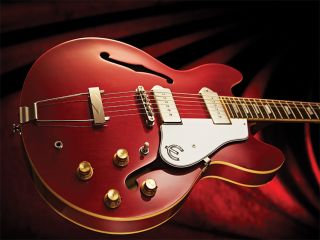 Back in 1966, John Lennon and George Harrison of The Beatles were on the sniff for some new guitars to replace their shagged- out Beatlemania-era Rickenbacker and Gretsch models.

As it happens, fellow Fab Paul McCartney had bought himself a '62 Epiphone Casino the previous year. Macca used his Casino to record the guitar solos on Drive My Car (from Rubber Soul, 1965) and Taxman (Revolver, 1966).

Knocked out by the guitar's playability, looks and tone, John and George followed Macca's lead and each bought a '65 Casino to record Revolver and to use on the band's last ever world tour in 1966.

The only real differences between the two guitars were the headstock shape and the design of the trapeze tailpiece, which was used on the non-Bigsby vibrato- equipped model.

Like the ES-330, 60s Casinos had fully hollow, five-ply laminated birch and maple bodies - they don't have a centre block like a Gibson ES-335 or Epiphone Sheraton - and a pair of singlecoil P90 pickups.

The Beatles connection is a huge part of the appeal of the Casino, but the bright chime of those P90s is crucial, too. Ease of playability is legendary thanks to slim necks, fattish frets and low actions.

While Beatle George later moved on to a red Les Paul and a beautiful rosewood Telecaster, Lennon had the finish stripped from his Casino, and used it right up to the break-up of The Beatles in 1970. That year also marked the end of the first run of US- made Casinos.

The model was subsequently resurrected in Japan in the late 70s, before making a huge comeback as a reissue in the mid 90s, thanks to Weller and Oasis.

US- and Japanese-made versions of Lennon's Casino, both finished (the '65) and stripped (the 'Revolution' guitar), are available, while the model's significance was marked by the 50th Anniversary model in 2011.

If you want to see why 60s Casinos are so sought after, check out the promotional video The Beatles shot for Rain at Chiswick House in London on 20 May 1966. It captures the Fabs and their Casinos at their pinnacle of cool.