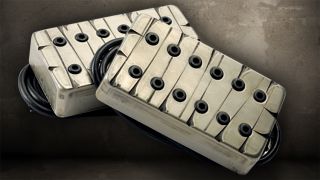 They're works of art for the ears and the eyes

Rewind to 2003, and it's unlikely that Seymour Duncan had many sleepless nights over the arrival of Bare Knuckle Pickups.

Dreamed up by former Elkie Brooks guitarist and martial arts nut Tim Mills in frustration at the flat tone of his 70s Les Paul, the firm was born in a practice room, then graduated to a "freezing" coal-shed, before settling in 2006 at its current location: a cramped shed in rural Cornwall.

Even now, as it toasts a decade in the business, BKP employs just 12 staff, and as Tim admits, "we're all a bit squashed". As a back story, it hardly screams impending greatness.

And yet, from these inauspicious roots, BKP has grown into a true British success story, giving players a fistful of vintage-flavoured pickups to rival the old guard. Named and voiced after classic songs, units including the Warpig humbucker, Irish Tour single coil and Supermassive 90 P-90 all have their enthusiasts.

Granted, it doesn't hurt that BKP has the industry's most striking casing designs, which range from faux-rusted gunmetal to a rendering of 19th century pugilist Jimmy Carroll. But the main event is the jaw-dropping tone: the result of Tim's militant insistence on machining components in-house - from 50s-spec butyrate bobbins to nickel silver baseplates - and hand-wiring every unit.

"There's absolutely nothing wrong with mass-produced pickups," he says. "It's just that by hand-winding our coils, and in particular, scatter-winding them [varying the tension and placement of each turn of wire for a more random winding pattern], we can allow the pickups to be more responsive, so they reproduce more frequencies off the string. The majority of players hear a wider frequency response and notice an improvement in dynamics - the tone feels bigger in every direction."

Pick up a Bare Knuckle and you'll be in good company. Following early patronage from Billy Idol wingman Steve Stevens, Tim has supplied units for Matt Bellamy's Manson models, and when Johnny Marr unveiled his signature Jaguar in 2011, custom-wound Bare Knuckle singles appeared at the neck and bridge.

It's an impressive trajectory, but being British, success hasn't gone to Tim's head. "Making pickups for guitar players, that's the ultimate high," he says, modestly. "Be it people who are just starting out or mega-famous dudes that everyone worships..."

Bare Knucle production moves to its current HQ in Cornwall