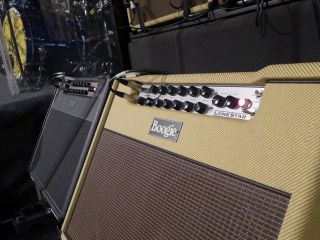 UK Mesa/Boogie distributor Westside has posted exclusive pictures of John Squire and Mani's Mesa/Boogie rigs that are set to rock Heaton Park in Manchester this weekend as part of the much-anticipated Stone Roses reunion shows.

Westside said: "This weekend sees the triumphant return of The Stone Roses for their first major UK shows in 16 years. The 220,000 tickets for their three nights at Manchester's Heaton Park sold in just 68 minutes, making them the fastest selling rock gigs in UK history.

"Fans will be travelling from all over the world to be a part of this very special musical moment and we are truly proud to announce that the both Mani and John Squire will be playing Mesa/Boogie. John has chosen a colossal four Lone Star 2x12 combos (yes FOUR! - including the only Lonestars ever to be wrapped in tweed, created especially for him by the Mesa/Boogie custom shop!).

"Mani is rocking two stacks of Big Block 750 heads combined with our Powerhouse Vintage 4x12 cabs, fitted with retro vintage Boogie badges. It's gonna be a great weekend and we wish John, Mani, Ian, Reni and all those fans making the pilgrimage the very best from us at Boogie!"

To see the images in question, visit Westside on Facebook.