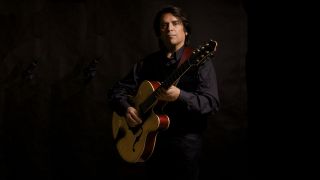 Californian Howard Alden is one of the greatest jazz guitarists working today. He learned his craft under the legendary Howard Roberts, and his jaw-dropping fretwork has graced everything from Hollywood soundtracks to duets with his mentor, seven-string pioneer George Van Eps. Here, he shares some hard-won secrets on how to play jazz guitar better.

Ask any clued-up jazz guitarist who the best players are today, and Howard Alden's name always comes up. His playing is classic yet full of invention; distinctive yet inspired by the work of the giants of jazz who were his tutors, including the late, great Howard Roberts. Yet, as we discovered when we met him earlier this year at Bristol's International Jazz & Blues Festival, he's a great teacher in his own right.

His advice for anyone interested in starting to climb the mountain of jazz guitar is practical, down-to-earth and based on getting the hang of easy fundamentals, instead of getting mired down in theory too early on. You don't need to be a jazzer to benefit from his advice, either - his method of starting with the basic melody of any tune and getting that under your fingers as soon as possible is a shot in the arm for any style of playing. Read on to find out why...

"I wanted to play a piano when I was a teenager. I started to play a little bit, but then I also tried to study a little classical guitar. So every time I went to my piano teacher he would say, 'Cut those nails off '. I'd go to the classical guitar teacher and he'd say, 'What happened? Go and grow some more nails'. I had already spent enough time on the guitar that I said I'd just stick with one thing at a time."

"One of my first guitar teachers in Los Angeles was a guy named Jimmy Wiebel. He was a great guitarist, who was also a student of [seven-string jazz-guitar pioneer] George Van Eps at one time. He gave me a few ideas when I was getting started and I continue to marvel at how much they pay off.

"One of the simplest is keeping every finger down on the fingerboard until it absolutely has to move to another note. This can be applied to melodies, scales... anything you play on the guitar.

"He really encouraged the idea of economy [of movement], for two reasons: to minimise effort, and to develop your technique to where one finger could move without the rest of the hand having to move along with it."

"Later, I studied under Howard Roberts, and he was an amazing teacher. Howard Roberts was a jazz and studio player for a number of years and he was very much into learning useful things: the idea that everyone learns what they want to learn when they need to learn it.

"He really believed in getting the tune off the paper and into your head as soon as possible and then playing it for someone as soon as possible, too. I can't tell you how many times - I suspect you've all had this experience, too - you'll be playing something at home, playing it perfectly and beautifully, and you'll go out and say to someone, 'Let me play this new thing for you' and all of a sudden, 'Oh s**t...' [you screw up].

"So it's amazing how just playing something for someone else can help reinforce it in your mind and in your fingers. That's one of the important lessons I learnt and that I keep in mind over the years."

4. Bass Is The Place

"When you're thinking about accompanying other guitarists, or a vocalist, try pretending for a while your guitar has just two strings. In this case, I'm thinking of the third and fourth strings. Just lose those other four strings, take them off, tape them off or just mark them with an X and don't play them. Because these middle two strings are really a great little centre ground. They're out of the way of the bass player, if you're playing with a bass player. They're out of the way of the melody if you're playing with a singer.

"It forces you to focus on just making two notes sound good and sound complete amongst themselves. Just pretend for a while that you have a two- stringed ukulele that's all you have to make music on and you have to make it sound as good as possible."

"If you're playing by yourself, you might want to have more bass notes involved to get a little more full sound. If you're playing with just a bass player, or you have other instruments in the band, then you'd want to go back to just thirds or little three-note chord voicings.

"You have to have a lot of possibilities in mind, and be able to choose whichever one is appropriate at the time. But again - sorry to keep harping away at this - it all comes down to really knowing the essential melody so well that you can play that perfectly by itself, and knowing where those bass notes are."

"I started playing a seven-string guitar in 1992 after I did the first couple of recordings with George Van Eps. You know, it's funny, even though I'd been listening to his records for years and knew about the seven-string, I was never really motivated to start playing one because I was perfectly comfortable on the six-string.

"I'd picked up a few other people's seven-strings over the years and they always felt cumbersome and not entirely necessary. But something about sitting in a studio next to George, watching him play for a few days at a time and seeing how it handled it, all of sudden it made it click for me.

"Another thing which drew me to playing a seven-string is that I'd hear pieces by some of the great piano players which I wanted to play on the guitar but needed a little extra range. Some of my favourite piano players like Bill Evans played in these clusters of fourorfivenoteswithinoneoctave,which is impossible when you're playing [six- string] guitar."

"Learning guitar effectively is like learning a language: you don't open a grammar book and memorise every single rule of conjunctions and where the verb and adjective goes, and whatever. You just learn how to speak in phrases, and then learn how to use it more efficiently. Then maybe after the fact you might go back and look and see what you're talking about."