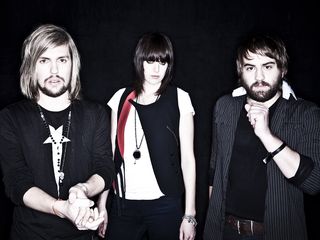 2009 has been a banner year for Band Of Skulls, a trio out of Southampton, England, who have gone from never-heard-of-thems to can't-miss-'ems in record time.

Their biting debut album, Baby Darling Doll Face Honey, has much to do with their newfound success. A deliciously wicked affair which will give fans of The White Stripes and early Smasing Pumpkins much to drool over (check out the video to the first single I Know What I Am below), it's filled with fiery playing and hooks at every turn.

Add to that the dual lead vocals of guitarist Russell Marsden and bassist Emma Richardson - think Billy Corgan trading off with Chrissie Hynde - and you've got a group that lives up to its mega-hype.

But it's a much coveted spot on the Twilight: New Moon soundtrack that could make Band Of Skulls a household name. "We're still pinching ourselves at the whole thing," says Marsden. "There's luck and there's crazy, out-of-control luck. To be on that soundtrack is definitely the latter."

It was only a couple of years ago that Marsden and drummer Matt Hayward were bashing around in college. "We always knew we were going to have a band together," Marsden says. "We just needed that other piece of the puzzle."

Which turned out to be art student Richardson. Marsden and Hayward convinced her that music was her true calling, and once they did things clicked - quickly. Before Band Of Skulls had finished recording their first album, they received an invitation from iTunes fill a slot for Single Of The Week. That song turned out to be I Know What I Am.

"After that, there was no looking back," says Marsden. "People started coming out of the woodwork to find out about us. Like I said, we're pinching ourselves."

MusicRadar spoke recently to Russell Marsden about the group's 'buzz band' status, the New Moon soundtrack and how he believes musicians have to "make their own luck. So much of it is talent, but you also have to market yourself. In the digital age, there's a lot at your disposal if you just get on with it."

Congratulations on getting on the New Moon soundtrack. That must have been a nice bit of news to receive.

"It was. Absolutely. We were pleased to be on the shortlist, but we didn't believe that we'd made the final cut until it was confirmed in the LA Times - we didn't want to jinx it."

The song that's on the soundtrack, Friends, isn't on your debut album. Was it a pre-existing track? When did you record it?

"Friends was a part of a session we did last Christmas of new songs for our album, soon after we were offered Single Of The Week from iTunes. Basically, we just ran out of time to include it on the album. So, yes, it was pre-existing, but it's the first thing we've released after out debut, so it feels very new to us."

Have you seen an early cut of New Moon?

"Not yet. We are, like everyone else, still guessing where it will be used in the film."

Have you heard the rest of the soundtrack? If so, what's your reaction?

"I've heard the Thom Yorke song, which is really good. The rest will be interesting to hear, especially songs from the likes of Bon Iver and Grizzly Bear."

So let's talk about all that's happening for you. Attracting attention, becoming a 'buzz band' - it's one of those mysterious things. So many bands try and few succeed.

"Yeah, I wish I could say, 'Well, it's because we're so damn great,' but there's so many bands out there that deserve attention as much as we do. I don't know why things are happening for us, but I'm glad they are."

You say that, but I know there's some specific things you guys did that helped you get noticed.

"That's true. I would say the biggest thing is that we didn't just sit around and wait for people to find out about us. I mean, there are bands that will form and within six months people will be throwing record contracts at them, but that isn't the norm.

"We sort of made our own luck. Part of that really started when we put out our own independent releases and got them on the web. But the biggest thing was we hired venues and put on our own shows. We didn't get on our knees to get bookings; we made our own bookings by running our own club. Gradually, we made a bit of a scene."

"Or maybe desperate. [laughs] A little bit of both. You have to be prepared. And by hook and crook we recorded our own album - little bits of it must've gotten heard as we were making it because right as we were finishing it we were offered a chance to be the iTunes Single Of The Week."

That must've opened doors. But how did the iTunes people actually find you?

"I think one of our early releases made it onto various websites, you know, where they go 'If you like this band, try this band' - that kind of thing. It was a bit random, but still, it never would have happened if we didn't record our own stuff and get it on the web.

"Funnily enough, the song the iTunes people asked for was I Know What I Am, which we hand't even finished, so that put a bit of a deadline on us. Still, it turned out great.

"Something I want to say, however, if I can give anybody anything to take away from all of this is, yes, you have to hone your skills and be a good, interesting band - of course. But you have to take chances and put yourself out there. Nobody's going to come find you in your basement. You can be the most amazing band in the world, but if you don't get your music in front of people, it's not going to happen.

"And another bit of advice: Don't break up. So many bands break up before they have their shot. It's like a marriage: if you think you have a chance, stay together. People get so impatient."

Let's talk about the sound of the band. I detect quite a bit of American influence in what you guys do. There's a bit of The White Stripes, stripped-down approach, but your vocal style and guitar sound is very reminiscent of early Smashing Pumpkins.

"Pretty true, I would say. I think I get a bit of my guitar style from a lot of American acts. I like guitarists who are daring, who take chances and play 'outside the box,' as it were. When you listen to people like Jimi Hendrix - he's a big influence influence - or those early Smashing Pumpkins records, you can't not be affected."

Like Hendrix and Billy Corgan, you seem to mix up the blues with a crazed, heavily distorted psychedelic approach.

"Yeah. I think that's because I played in a blues band for a short while. Kind of got my blues chops together. Very important, that was. Made me well-rounded. But I do like out-of-control sounds. I love guitar sounds that just take your head off."

And vocally, there's the balance of vocal styles. You and Emma work well together.

"Oh, absolutely. I wouldn't want to listen to me for an entire record. [laughs] Talk about boring! No, what Emma brings to the band as a bass player is fantastic, but as a vocalist, she's crucial to our sound.

"A lot of bands can carry on quite well with one singer and you don't get sick of them. I like bands that offer more variety, so that's what we try to do. If you get tired of me, don't worry, something else is coming." [laughs]

Let's talk about your gear. What kind of guitars do you use?

"My main guitars are two Fender Jazzmasters. I have a new one and an old one - I'm not quite sure what year that one is. I quite like them; I can get good, raucous sounds out of them. My other guitar that I use a lot is one of those new Danelectros -"

"They are! It's my overdubbing guitar. It's cheap but it really rocks."

Amp-wise what do you use?

"My main amp for recording was a Fender Hot Rod DeVille 212, which I absolutely love but it's been breaking down a lot. So I just got a Fender Vibro-King, and I think I'm probably going to go to Hell for using it because it sounds so good.

"It's probably the best amp I've played through. No matter where I stand on stage, it's tremendous."

"Exactly. It's a very musical amp. I wish I'd found it sooner."

"I have an Electro-Harmonix Big Muff and a Dunlop Crybaby Wah. I keep things pretty simple. I don't think I'm going to be one of those guys who gets the big rack of effects or a giant pedalboard. First off, I don't have the money!" [laughs]

Well, that could change soon.

"We'll see. [laughs] But I think I'll keep with the simple-is-better approach. It's worked so far."