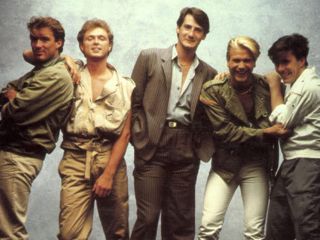 If you just saw four men on horses ride by, it's not because you live near a stable. It's because Spandau Ballet, those new romantic hitmakers of the early '80s, have announced they're getting back together.

All of which means one thing: every group, no matter how big or small, no matter the genre, will eventually reform.

Spandau Ballet will officially announce their reunion aboard HMS Belfast in London on Wednesday (25 March) when they will reveal plans to release new songs and details of a world tour, which is believed to include a date at FC Barcelona's Nou Camp stadium in Spain.

"The boys are back in town and we can't wait," lead singer Tony Hadley told The Independent. "It's going to be brilliant, we're very excited, but it will be very different.

"There will be all the hits, the nostalgia, but there will also be a new take on what Spandau Ballet are about."

The band, considered pioneers of the new romantic movement (extreme emphasis on hair and fashion, see also Duran Duran) had lush hits such as Gold and True before busting up in 1989.

The group's five members forged their own solo careers, including spells of acting for Gary and brother Martin Kemp (both of whom received good notices for their roles in the 1990 film The Krays).

Clop-clop-clop-clop! There go those horses again. Something tells us an Adam And The Ants reunion could be upon us.