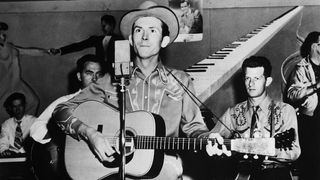 ACOUSTIC WEEK Unlike blues, it's easy to trace the time and place when country music came of age. The year was 1927 and the moment was when Jimmie Rodgers and The Carter Family separately visited Ralph Peer's mobile recording studio in Bristol, Tennessee.

At the Bristol Barns, as they were known, each act laid down tracks that would captivate American listeners and start an industry that today makes rock look like a side show. For her time, Maybelle Carter was a virtuoso guitarist, having invented a bass-and-melody style that bears her name. Carter picking would later form the basis for Merle Travis and Chet Atkins' advanced electric guitar techniques.

The extended family group recorded over 250 tracks between 1927 and 1943, when they finally called it a day. These included Keep On The Sunnyside, Wabash Cannonball and Foggy Mountain Top. Maybelle's daughters Anita, Helen and June continued the family business well into the 1950s, the latter eventually marrying superstar Johnny Cash. Jimmie Rodgers became a US household name after that first session, with his two ballads, The Soldier's Sweetheart and Sleep, Baby Sleep. Other famous Rodgers tracks include The Brakeman's Blues and In The Jailhouse Now.

Then there were the cowboys. These were the first nation-wide stars of country as they, their songs and guitars proliferated the Western films that were all the rage in the 1930s and 40s. Roy Rogers and Gene Autry were the cowboy superstars. Both artists featured in dozens of films (Rogers with his Four Legged Friend, Trigger), and Autry helped devise the Martin D-45.

Cowboy songs talked of the range, of riding the trail and of missing their women, with titles like Don't Fence Me In, Back In The Saddle Again, Tumblin' Tumbleweeds and There's A Love Knot In My Lariat! Cowboy singers evoked huge national pride in a country that had forged itself through true grit and a pioneer spirit. Following in Rogers and Autry's wake came many other cowboy bands and singers, including Bob Wills And His Texas Playboys, Tex Ritter, The Sons Of The Pioneers and Ray Whitley, who was instrumental in the development of Gibson's SJ-200.

As well as films, country music also made stars via the radio. And the biggest country radio show of all was WSM's Grand Ole Opry in Nashville. Singing fiddle player Roy Acuff became the Opry's main star, his band The Smoky Mountain Boys featuring Clell Summey on Dobro, starting a sound that would typify acoustic country from then on. The Opry became the place to play, an appearance often leading to instant success. There cannot be a major country artist who hasn't stood on its famous stage in the Ryman Auditorium, and many believe they haven't truly made it until they do.

While country was an intrinsically simple music, bluegrass - pioneered by Blue Moon Of Kentucky star Bill Monroe, whose band included the legendary Lester Flatt and Earl Scruggs on guitar and banjo - thrived on virtuosity.

In 1948 Flatt and Scruggs left Monroe to create a partnership that's legendary in bluegrass. Scruggs' three-finger 'rolling' banjo picking and speedy licks amazed all who heard him - if you think you don't know his music, Scruggs played the theme tune to the hit TV series The Beverly Hillbillies.

This method of picking later found its way to the guitar, and can be heard in the incredible techniques of electric players like Albert Lee and Brent Mason. But it's also clearly apparent in the acoustic picking of Nickel Creek's astounding 26-year-old Sean Watkins, Alison Krauss' Dobro virtuoso Jerry Douglas and guitarist Dan Tyminski, and of course the astounding multi-instrumentalist Ricky Skaggs.

The Coen Brothers' 2000 movie O Brother, Where Art Thou?, starring George Clooney, featured Krauss, Tyminski, The Soggy Bottom Boys, Gillian Welch and others in a soundtrack that brought bluegrass and traditional acoustic country to a mainstream audience. This resurgence of bluegrass has also seen the rise of the 'newgrass' phenomenon, with artists such as Dan Crary, Tony Rice, Jim Lauderdale and Larry Cordle showing just how technically brilliant this essentially simple form of music can be.

In the 1950s and 60s, country was taken over by the crooners. Jim Reeves, Patsy Cline, Tammy Wynette and a hundred others sang while we wept into our beers. But lurking behind the Nashville schmaltz were always harder edged acts, like the man In Black, Johnny Cash, the brilliant but alcoholic songwriter George Jones, and of course the headband- wearing, nylon-strung guitar player Willie Nelson.

Cash's earthy songs, like Folsom Prison Blues, I Walk The Line and Ring Of Fire made him a household name outside the country genre, while Nelson's clever writing and unique vocal and guitar style have won him millions of fans.

Today, country music is in the hands of the Nashville moguls. And while Garth Brooks, Randy Travis, Reba McEntire and others continue to sell millions of records, the lonesome voice of Hank Williams still rings in their ears. Williams, a native of Alabama crippled by spina-bifida, would epitomise the travelling country singer, just as Robert Johnson had in blues and Woody Guthrie in folk.

His charismatic performances and song writing of almost genius proportions ensured his star status. He played at the Grand Ole Opry, recorded over 200 numbers - mostly self-penned - and when he died in the back of his Cadillac aged just 29, took on almost mythical status. Williams' catalogue included Lovesick Blues, Hey Good Lookin', Jambalaya, the mournful Lost Highway and his biggest-selling weepie, Your Cheating Heart. He was recently honoured with a D-28HW signature model, after the Martin guitar he so prized during his short life as a rambling man.

Jimmie Rodgers, the 'Father Of Country Music' is born in Meridian, Mississippi

The Sons Of The Pioneers make their first serious recording

Jim Reeves dies in an air crash outside Nashville

Hank Williams is inducted into the Country Music Hall Of Fame, Walkway Of Stars

Elvis Presley records the Willie Nelson composition, You Were Always On My Mind

Flatt and Scruggs inducted into the Country Music hall Of Fame

Willie Nelson inducted into the Country Music hall Of Fame