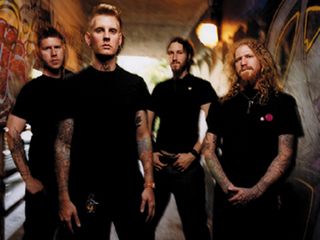 Mastodon are back with Crack The Skye

Mastodon's new album Crack The Skye is available for streaming in its entirety on the band's MySpace page.

Crack The Skye is another concept album, this time about "ether".

"The whole story has little to do with what the album emotionally is really about. But everything in the lyrics and the story is metaphors. We wanted to stick with elements and we wanted to do the 'ether' record. Ether is what the soul is made out of and it took a few months to connect all the dots."

Rasputin, Icarus and the Devil?

What does this really mean? Dailor elaborates:

"There is a paraplegic and the only way that he can go anywhere is if he astral travels. He goes out of his body, into outer space and a bit like Icarus, he goes too close to the sun, burning off the golden umbilical cord that is attached to his solar plexus.

"So he is in outer space and he is lost, he gets sucked into a wormhole, he ends up in the spirit realm and he talks to spirits telling them that he is not really dead. So they send him to the Russian cult, they use him in a divination and they find out his problem. They decide they are going to help him. They put his soul inside Rasputin's body."

"Rasputin goes to usurp the Czar and he is murdered. The two souls fly out of Rasputin's body through the crack in the sky(e) and Rasputin is the wise man that is trying to lead the child home to his body because his parents have discovered him by now and think that he is dead. Rasputin needs to get him back into his body before it's too late.

"But they end up running into the Devil along the way and the Devil tries to steal their souls and bring them down…there are some obstacles along the way."

The title track Crack The Skye features vocals by Scott Kelly of Neurosis. Apart from that, it's best just to listen.