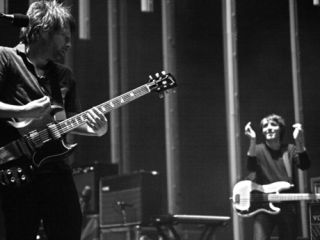 Have Radiohead finished their new album? Bassist Colin Greenwood (and brother of guitarist bandmate Jonny Greenwood) has penned a lengthy online essay for Index On Censorship in which he states that the group has "just finished another group of songs, and have begun to wonder about how to release them in a digital landscape that has changed again."

The maverick British band have been at the forefront of the digital music revolution: to much fanfare, they released their previous album, In Rainbows, without the initial support of a record company and let fans access the the album on a pay-what-you-want download method.

"With In Rainbows, we were able to be the first people to digitally release our record, directly to people's personal computers, at 7:30am GMT on 10 October 2007," Greenwood writes. "I was having breakfast, and watched as the file appeared in my email, and the album streamed onto my desktop. I spent the next day and night monitoring people's reactions online, both to the music and the means of delivery.

"Journalists in America had stayed up overnight to write the first review as they received the music - again, in the pre-digital age they would have had advance copies up to three weeks before. On the torrent site bulletin boards, people were arguing over whether they should be downloading and paying for the record from our site, rather than the free torrents. Various online pundits and pamphleteers were pronouncing the end of the record business, or of Radiohead, or of both."

Greenwood continues, stating, "For all the giddy prognostications, the most important reason for the success of In Rainbows was the quality of the music. I think this was overlooked, but without the great songs that we were proud of, the online release would have counted for nothing. I am optimistic that if you make good work you can secure the patronage of your fans."

There is no word on whether the still-untitled new album will be released, but according to Greenwood, he maintains a bit of affection for the days of record companies gone by: "I understand that we have become our own broadcasters and distributors," he writes, "but I miss the editorialisation of music, the curatorial influences of people like John Peel or a good record label. I liked being on a record label that had us on it, along with Blur, the Beastie Boys and The Beatles."