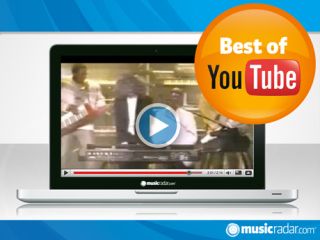 YouTube is brilliant. Over one billion views a day, 20 hours of video uploaded every minute (that's over 130,000 full-length Hollywood movie releases every week!) and, most importantly, the ultra-addictive dumping ground for all manner of video brilliance, be that rare footage of The Beatles in Japan or just a certain cat pounding a certain keyboard…

So to celebrate five years of lunchtime-destroying belly laughs, knackered clips ripped off MTV and totally WTF cover versions, we thought we'd whittle down our favourites to just five.

All totally cool, all jaw-dropping and all, of course, MusicRadar's own particular favourites. The next question is… So what did we miss?

Just leave your suggestions in the comments below. Alternatively, email us at ask@musicradar.com or let us know via Twitter or Facebook. You can Fan and/or follow us on both with an @musicradar. Mark all your entries #askmusicradar and we'll run a Top 100 YouTube Clips Ever countdown in a week or so.

We could devote an entire month to cool YouTube clips of Buddy Rich. His flying drum kit, his sick stick trick solo, his classic 1965 drum-off with Jerry Lewis or his insane drum battle with Ed Shaughnessy on The Tonight Show, but instead we settled on the drum battle to end them all - just look at Animal's face at 2:07…

Synth nerds rejoice! Beamed by disembodied robots from the future via the February 1985 Grammy Awards, Thomas Dolby, Herbie Hancock, Howard Jones and Stevie Wonder perform a is-it-a-pre-record-or-isn't-it? synth medley of such coolness it blows a modern man's mind. Not feeling the 606 action? Check out these guys for a modern update…

Cover versions totally rule YouTube and Europe's The Final Countdown is right up there as one of the most covered song ever - acoustic, cello, chiptune, Spongebob, kazookeylele… You name a style, it's been applied to this hair metal masterwerk. However, it is also the proud owner of what is possibly the Worst Cover Version Ever. You got better (ie, worse)? Bring it.

Twice UK Beatbox Champion Beardyman is a total YouTube legend - check his Kitchen Diaries, his YouTube Live appearances, his TV appearance on When Will I Be Famous or his oompa-loompa channelling improv "things". However we've plumped for the sublime Monkey Jazz, with cool animated edits from mr_hopkinson and added Kaoss kourtesy of Korg…

And finally, we need a guitar clip. And because we've only got space for one, if that clip can feature more than one guitar, some breathtaking technqiue and - hey - be of a man playing a video game theme, then all the better. We give you Zack Kim, the Super Mario Brothers theme and over 27 MILLION VIEWS! It would only be better if he was playing this… Of course, if this is too geeky, the more metal-minded of you might prefer Mr Paul Gilbert as seen here, My, this promising young man certainly can shred…