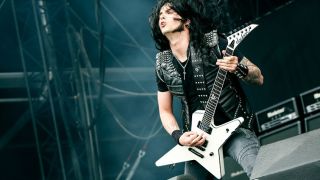 "I'm beyond excited and honoured to confirm that I've joined the Jackson Guitar family," says an excited Gus G.

"We're working on new versions of my Star shape guitars that I've played for more than 12 years. Plus, the fact that my custom shop axes are built by the legendary Mike Shannon, who built Randy Rhoads' first Jackson, gives me goosebumps and takes the excitement up 10 notches!

"Thanks to the Jackson team for making things happen, and I am stoked for this new guitar chapter ahead."

"We are beyond thrilled and honoured to welcome Gus G. into the Jackson family," says equally keen Jackson Artist Relations Manager Mike Tempesta.

"His playing style, command of the instrument and dedication to the craft exemplify the type of artist that keeps the Jackson legacy alive and well. The entire Jackson team looks forward to an exciting future with the Greek Metal God!"

At least ESP can console themselves with two new signature models from Mastodon's Bill Kelliher, who left Gibson to join the Japanese guitar giant's roster earlier this month.