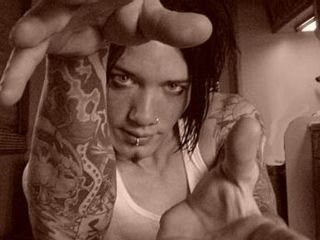 Ashba, who formed his own inventively titled band called Ashba is credited with writing and producing tracks for the last Motley Crue album Saints Of Los Angeles.

Loving announcements all around

In an announcement on the Guns N' Roses website, Axl Rose said, "DJ 's a gifted, energetic guitarist that Guns N' Roses is proud to have on board!! We're very excited to have the opportunity to work together.

"Guns' radar has silently been aware of DJ's presence for quite some time! He brings a fresh approach to our particular brand of mayhem, expanding the tapestry of Guns N' Roses live. Once DJ's name was in the hat, the hat disappeared!!"

And, of course, DJ returned the love to his new employer, saying, "It's an honor to have the opportunity to be a part of a band that I have always loved and respected. I'm looking forward to working with Axl, who is not only one of the few great frontmen of our generation, but a true artist."

However, 'working with' is a relative term when it comes to Guns N' Roses. The band has yet to tour behind Chinese Democracy (which just slid off the Billboard Top 200, failing to sell even 2800 copies last week). But rumors are beginning to surface that GNR might hit the road this summer with Van Halen and (gulp) Creed.

Which means just one thing: Given Axl Rose's history of tardiness at gigs, you have an excellent chance of seeing Van Halen.