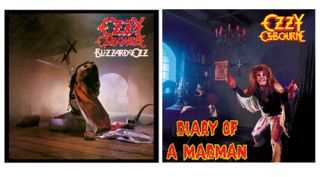 "Randy Rhoads was such an intelligent player," says Bumblefoot. "Nobody has come close to what he did"

"As soon as Blizzard Of Ozz came out, everybody started talking about this new guitar player, Randy Rhoads. I was eleven years old and already took guitar lessons, so of course I had to know what the commotion was all about. I ran out and bought the record, and man, I couldn't believe what I was hearing. The guitar playing was astonishing. Such vitality! But what really impressed me right off was Randy's vibrato. On that first album, he was already in a class of his own.

"Even though I was a kid, I made my own guitar - hey, I was into it, you know? I put together a homemade vibrato bar and installed it in the guitar so I could play like Randy, at least so I thought. My main motivation was trying to play the Over The Mountain solo. Needless to say, my luthier skills left a lot to be desired: I took the guitar to one of my lessons and tried to show off for my teacher. I bent the bar up and one of the springs just popped right out. The whole thing kind of broke right there. I was so bummed and humiliated.

"Randy's approach to fusing classical music with heavy metal was so unique. I studied his playing like mad. Even his gear - I was reading all the magazines to see what he used, and I bought my first Marshall amp because that's what he played through. By the time I was 13, I was in a band, Paradox, and we covered some Ozzy and Randy tunes. I'm not saying we were good, but we tried our best. [Hear a rare recording of Paradox, featuring a then 13-year-old Bumblefoot, performing Over The Mountain at the end of this piece.]

"Randy was definitely an early guitar hero of mine. He was unlike anybody around at the time. He played with such fire, grace and intelligence. Even today, Randy Rhoads' playing still stuns me. Listening to the 30th-anniversary reissues of Blizzard Of Ozz and Diary Of A Madman really brought home what an influential guitarist he was - and is."

"First off, the bonus tracks are incredible. There's three of them, and they're all cool. My favorite, though, is simply called RR, a one-minute-plus piece of Randy playing. Hearing it is like opening a door and peeking in on somebody when they don't know you're around. It's so candid and beautiful. Randy might have been just fooling around at the time, warming up or whatever, but he's still dazzling."

"The rest of the record is just the way I remembered it, only better. The remastering really brings out Randy's playing so clearly, but it doesn't sacrifice the vocals or the rest of the band. Goodbye To Romance, Revelation, Dee… Dee, oh man, what a knockout! The version here transported back in time to when I used to listen to it on my parents' stereo with headphones.

"All the little details, too: The fade-out on Crazy Train - I remember the way it used to be, with Ozzy laughing and saying what sounded like 'dick' - now you can make it out more; there's real definition to it. It seems slightly longer, and all the nutty sounds everybody was making really come through. All the things I tried to hear as I kid - I used to turn the volume up all the way on the fades because I didn't want to miss a single note - I can hear them now.

"The doubled solo in Crazy Train is a work of art. I love the fact that the two takes aren't exactly the same - Randy changed them so slightly - but the way they sit on top of each other is mind-blowing. You can tell he put a lot of care and thought into what he was doing.

"With this record, Randy Rhoads planted the flag. He made it so fucking cool to learn classical music. Other rock guitarists had dabbled in it before - they put their toes in the water - but Randy showed kids like me that you could play classical and still be a balls-out guitar guy. In high school, I started learning classical pieces, all because of Randy Rhoads and this album."

Diary Of A Madman

"Here, Randy built on what he started with Blizzard. It's like he made up a brand-new color or something, as if he were one of the world's first painters mixing two primary colors together and creating something nobody's ever seen before - or heard, in this case. When you think about it, what he did shouldn't work - the contrasts should oppose each other - but Randy did it with such skill and imagination that he created a style that everybody is still copying, myself included."

"The new version of Diary kicks up the grooves - those drums really cut through. And Ozzy's vocals are up front and in your face. The remastering bolsters everything, but nothing sounds overly tinkered with or artificial. It sounds like the record I loved as a kid and then some.

"From a guitar standpoint, the highlights are Over The Mountain, Flying High Again and S.A.T.O. On Over The Mountain, Randy doesn't go in for the standard pentatonic blues riffs - he throws in a classical feel with this Aeolian-like melody. It's something a violinist might have played. What a cool sound! And then he builds up and pulls the notes up and lets loose with harmonic overtones… Nobody but Randy could've played like that. I just fucking love it. Everybody's tried doing it - I've tried it - but nobody can do it the way he did. Pure magic. It makes you stop what you're doing, and all you can do is stare at the speakers. It owns your ass!"

"Listening to this record, it seemed to me that Randy might have been checking out Eddie Van Halen. Between every vocal line of every verse, he throws in a little riff, and it's always very Van Halen-like. Be it a note or a flurry of notes, he fills the spots, and there's a definite VH influence going on.

"Ozzy's voice is spot-on throughout. The whole band is just cracklin' good. There's probably a lot of live Ozzy bootlegs floating around, but this one is probably the definitive document of that classic group during the era of Randy Rhoads."

DVD - Thirty Years After The Blizzard

"Watching this, I got kind of welled up with emotion, and that doesn't happen too often. Just seeing Ozzy listening to the raw tracks and Randy's isolated takes, the moments where he goes, 'What was that? Where did that come from?', you know what he's feeling. The look in his eyes, the way his face changes at certain points…it hits you in the heart.

"The testimonies from the various artists, especially Zakk Wylde, are very profound and eloquent. I love documentaries like this that let you in on little secrets, all the unused vocal tracks I never knew about, and discovering that Ozzy was just making up sounds on certain songs. It's a real treat. Anybody who's an Ozzy Osbourne and Randy Rhoads fan will truly appreciate the intimate look behind the studio glass that this DVD provides."

Listen: Paradox (featuring a then 13-year-old Bumblefoot) performing Ozzy Osbourne's Over The Mountain