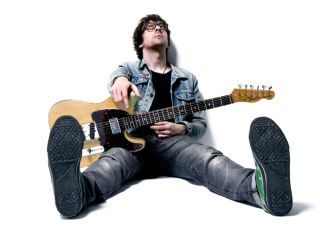 In the latest issue of Total Guitar, Graham Coxon - the Blur guitarist and solo artist - confides that he reckons Slash wouldn't rate his technical ability.

Earlier this month, MusicRadar's sister magazine Total Guitar found itself in the serendipitous position of having both Slash and Graham Coxon in the photo studio on the same day, sparking Coxon to comment that, "Slash probably thinks I'm a complete jessie!"

"I always do this thing of making the worst guitar solo," the Britpop guitar hero told TG. "The kind of thing that would make our friend Slash think, 'Shit, a fucking nine year old has played this'."

Coxon, who is currently on a UK tour in support of his recent solo album A+E, also revealed that he doesn't rate the players that he emerged with in the 90s.

"I found everything else quite ugly and boring," he told the mag. "Not necessarily Jonny [Greenwood]. Jonny's great, and they're a really interesting group. Bernard [Butler], obviously, is a great player, but I did have trouble listening to Suede… I found the overall sound a bit of a challenge to my ears. I was listening to the Americans, like Stephen Malkmus. They were a bit more dangerous."

Check out Total Guitar issue 227, on sale now, for the full Graham Coxon interview, plus a complete tab and backing track for Blur classic Coffee + TV.