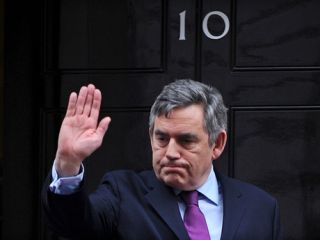 Dateline: 10 May 2010. British Prime Minister Gordon Brown stands down as Labour Party leader. The United Kingdom is plunged into shock as all three main political parties scrabble to do last minute deals in an effort to claim the 326-seat majority required to form a stable government. Who will lead the country? Cameron? Clegg? Miliband? All three?!

Well, no. Not according to you lot. Last week, we asked the MusicRadar audience which pop star they would like to see as Prime Minister. We gave you a few suggestions that made sense. Lord Bono of U2. Evil Simon Cowell. Militant Billy Bragg. Saint Bob Geldof. One of these guys would surely get the majority needed to run the country, right?

Wrong - you voted for Ted Nugent!

Tracking him down to an airport on his way to a bear hunt (honestly, we're not making this up), MusicRadar spoke to The Right Honourable Mr Theodore Anthony Nugent and asked him for a message for the UK nation who voted for him.

No, us neither but it sure beats what Bono would've said, right?

So, what next? Well, as real life has shown, The Motor City Madman might've won the poll but 23% is hardly the majority required to get the keys to the big black door. Here are just three possible scenarios as the losers seek to form a rock 'n' roll government:

1. Snoop (pictured above consulting with world leaders at the G8 Summit in Stockholm) forms an alliance with Gallagher, Gaga and Allen and pushes for PARTY TIME ALL THE TIME!

2. Bono (pictured above enjoying a joke with best mate Gordo) forms an alliance with Sir Bob and Billy and pushes for something so boring we can't even bother coming up with the gag about it.

3. Lady Gaga (pictured above asking Her Majesty to form a new government) forms an alliance with Lily, Courtney and - what the hell - Billy and pushes for everyone to be just fabulous forever.

Alternatively, we could stop all this mucking about and leave it to the big boys to sort all this mess out. That said, looking at what's happened so far and and the mess we're still in as MusicRadar types, there is but one thing left to say…