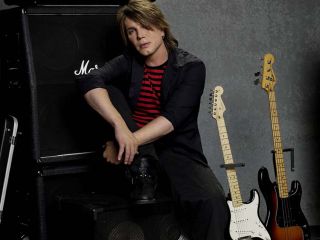 John Rzeznik of the Goo Goo Dolls has received the Hal David Starlight Award for songwriters making a significant impact on the recording industry. Rzeznik joins Rob Thomas, Alicia Keys, John Mayer and John Legend as recent recipients of the award. At the award ceremony in New York Reznick went on to perform the Dolls' hit Slide.

Commenting on the award to Rzeznik, Hal David - lauded as a writer for his work with Burt Bacharach - said, "John Rzeznik is well-deserving of the Starlight Award, not only shining as an outstanding, talented songwriter, but one with a unique vision. We are pleased to honour him with this prestigious award."

Rzeznik has penned a series of chart-topping songs for the Goo Goo Dolls, including Name, Iris, Slide and Let Love In. The band released a new single, Real, on 7 July.