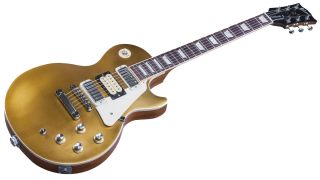 The new LP is inspired by (ie, not a precise replica of) Townshend's '70s guitars, in particular a Les Paul Deluxe Goldtop that The Who guitarist smashed in 1976 at the band's Boston Garden show, which is now on display at London's Victoria and Albert Museum.

Gibson's version packs mini-humbuckers with a DiMarzio Super Distortion (as opposed to the original's Dual Sound) humbucker sandwiched in the middle, along with a middle pickup blend rotary and second three-position toggle for that pickup, as well as the standard LP control set.

The PT LP's body features a walnut strip flanked by mahogany, and also offers a nod to the fate of Pete's original, with a 'Break Here' sticker on the back of the neck at the 8th fret.

Only 150 of these models will be made, and with a price tag of $3,999, we'd advise potential buyers to resist the urge to smash them.

It looks like Pete's already been road-testing the new guitars, too, if recent footage from The Who's European tour is anything to go by…