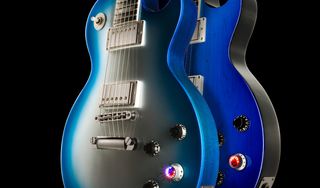 The limited edition and production versions side by side

Gibson has announced details of its new Robot Guitar. While the name sounds very sci-fi, in a kitsch sort of way, essentially the Robot Guitar is a Les Paul equipped with Tronical's Powertune automated tuning system.

The guitar not only self-tunes and self-intonates, but also features a rotary master control knob that gives access to a range of customisable alternate tunings including Open E, DADGAD, Drop D and several others.

Gibson boss Henry Juszkiewicz: "Every player is challenged with tuning. Things like stage lighting and weather can change the instrument and have it out of tune within minutes of being in tune. Professionals have guitar techs and as many as 80 guitars on stage to combat that, but the average person doesn't have that."

Also, if the Robot Guitar isn't impressive enough for you, how about a robot that plays the violin? Click here to see the amazing video on the Guardian website.